Seán O'Hara is running 30 marathons in 30 days throughout November as part of the Movember fundraising campaign and is aiming to raise an ambitious €25,000 for men's health services. 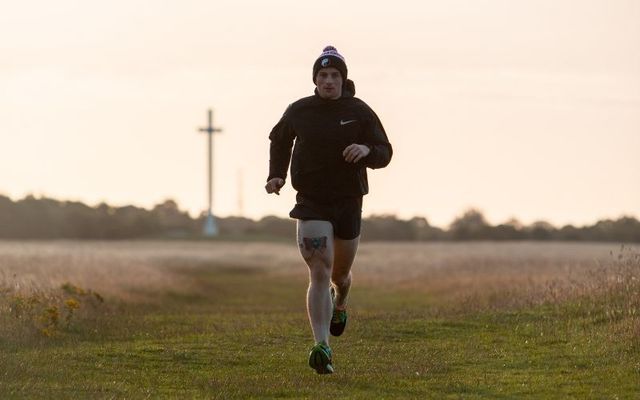 Seán O'Hara is running marathons all over Dublin to raise money for Movember. Seán O'Hara

It was early 2018 and 22-year-old Seán O'Hara found himself in St. Patrick's University Hospital Dublin after battling depression and anxiety for more than 18 months.

Fast forward three-and-a-half years and O'Hara, now 25, finds himself in a better place and is now aiming to raise money and awareness for mental health services to help young men in a similar position to him.

O'Hara is running 30 marathons in 30 days throughout November as part of the Movember fundraising campaign and is aiming to raise an ambitious €25,000 for men's health services.

The Dubliner has taken part in the last four Movember campaigns since 2018 as a means of giving back to the people that helped him overcome his own mental health issues and said that he wanted to do something "mad enough" this year to attract people's attention.

He told IrishCentral that he ran his first-ever marathon as part of Movember last year and noticed the physical challenge helped to elevate his fundraising appeal far beyond the usual mustache-growing campaign that men undertake during the month of November.

O'Hara, who picked up running during the first coronavirus lockdown, said that he first had the idea to run 30 marathons in 30 days in May 2021. He took the idea of running 1,266km in a month to his running coach, who tried his utmost to talk him out of the idea.

"I talked to him about it. He thought I was a bit mad at the start, but I told him I wanted to do this," O'Hara said.

"He sat me down and talked me through everything that would be involved in something like this; everything that could go wrong and the reasons I shouldn't do it. In the end, he asked me was I still interested in doing it and I said "yeah" and he said let's go ahead with it."

O'Hara has now completed 20 marathons and is showing no signs of slowing down.

I’m running 30 marathons in 30 days this November to raise money and awareness around men’s mental health @MovemberIreland Please give this a watch and share and let’s open up these conversations that could help you or someone you love. Link to donate is https://t.co/YaX3elmprG pic.twitter.com/loWvVHnMGv

Speaking to IrishCentral on Friday, he said that he completed his first sub-four-hour marathon on November 19 after previously recording his personal best a day earlier.

However, he admitted dealing with some physical and mental wear and tear throughout the grueling 20-day campaign, including a comedown after reaching the halfway mark.

"I'd built up the halfway point to be a bit of a thing in my head. Then the next day I thought right "I have to do this all over again".

"It didn't help that I had a few physical niggles. My ankle was hurting again and my hamstring was sore, there was a big headwind in my face as I ran along the coast and in my head, I just thought, 'how am I going to get through today'?"

The 25-year-old is encouraging people to join him on his journey, whether it be for five kilometers or a full marathon.

Every night before his next run, he posts a map of his route along with certain points where people can join in, including a half-marathon point and the final five and 10km marks.

He has also connected his live tracker to his GPS watch so that people can track his progress and join him where they can.

He said that there has only been one day so far where he has completed a full marathon by himself and said that both friends and strangers have come out to support him at various stages of his journey.

"They take the load off my back and take my water pack and snacks and gels for a while. It's been a nice mixture of having people there for patches and having my own time to run by myself and soak up what I'm doing."

Having overcome the comedown of passing the halfway point of his arduous journey, O'Hara now believes that he is on the home stretch and is attempting to raise a further €12,000 so that he reaches his target by the end of the month.

He is also aiming to raise further awareness about mental health, stating that he believes there is still a stigma attached to men's mental health problems.

"There were no dads or uncles or brothers or cousins or friends talking about men's mental health when I was in school. It just wasn't a topic.

"When I was dealing with a lot of anxiety and having my first-ever panic attacks and dealing with depression, I didn't really know what it was because it wasn't talked about."

He said that he didn't have the tools to deal with what was going on inside his head and added that he felt uncomfortable talking about his mental health with others.

"I felt so different and so alone with it because no one else was talking about these things."

He said that he hopes he can help normalize opening up and having conversations about mental health among young men.

He hopes that teenagers and young adults will feel comfortable checking in on their friends and asking if they're ok.

"I think creating a new environment around mental health is really important and can really make a world of difference.

"There'll still be mental health issues there, you're never going to get rid of that. It's just about creating an environment where people are more willing to reach out and seek help and support."

Exercise has helped O'Hara to overcome his own mental health issues and he said that something as simple as going for a walk can make a difference.

However, he stressed that there is no one-size-fits-all solution to mental health and said that there is almost too much emphasis on exercise as a cure.

"It's not for everyone," he said. "People's mental health is very individualized and personalized and very specific. What might work for one person might not work for someone else."

Instead, he encouraged people dealing with mental health issues to find what works for them and build up a "toolbox" of techniques and responses to deal with their condition if it "rears its head".

"It's about having other bits as well and not relying solely on one thing and thinking that that's going to fix you."