Dogs Trust allowed each of its furry residents to pick a new toy this Christmas and hopes that the accompanying video will find them a new home. 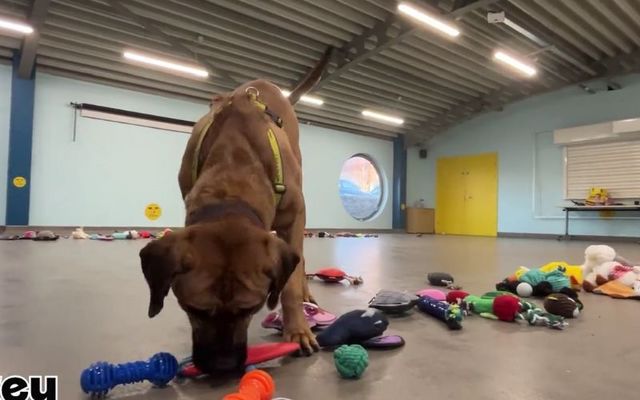 Irish animal charity Dogs Trust has brought the joy of Christmas to all of the dogs in its shelter, allowing each dog to choose a new toy for Christmas.

Each furry resident in the Dogs Trust Rehoming Centre in Finglas was allowed to pick out one toy to bring back to their kennel earlier in the week.

Dogs Trust supporters donated hundreds of toys to the charity in the lead-up to Christmas, which were laid out for the dogs by "Santa Paws" and his elves, the charity said in a suitably terrible holiday pun.

"Each dog was allowed in, one at a time, and using methods known only to themselves, selected a toy to take back to their kennel," Dogs Trust said.

Some dogs sniffed out their Christmas toy within seconds, while others were far more selective with their methods, sniffing, testing, and picking up multiple toys before finally deciding on the right one.

One collie cross named Queenie hilariously decided that one toy would not be enough this Christmas and decided to play with multiple toys at once.

#SantaPawsDay is here! The day all the dogs get to choose their very own toy for Christmas! 🎅🐾
Thank you so much to everyone who helped Santa Paws out by sending in a toy 💛 A very Merry Christmas to everyone watching, from all of the humans and dogs of Dogs Trust Ireland 🎄🎅 pic.twitter.com/plN65i1SRh

Dogs Trust said the process of selecting a new toy can help bring out a dog's true personality, especially if they are nervous of unfamiliar people. The charity said the process "allows potential adopters to see the ‘real them’ which may take a few months to emerge in a new home."

A similar video last year was shared more than 20 million times on social media and Dogs Trust is hoping that this year's video will receive similar attention and help secure new homes for each dog.

To find out more, or to donate to Dogs Trust, click here.