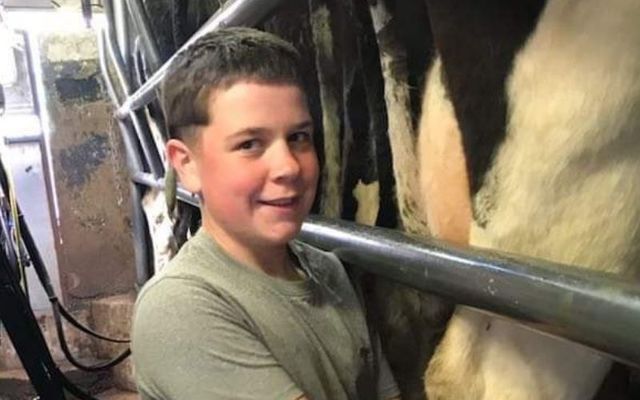 A 13-year-old boy displayed "astonishing bravery" to save his father's life during a near-fatal farming accident in Cork on Tuesday.

Brian and Declan had mounted the agitator on the back of their New Holland tractor when it fell off the stand and pinned Declan between the tire and the agitator so that he couldn't breathe.

He was "out cold" within a matter of seconds and was "turning blue" within minutes.

"I just felt this awful pressure... I felt like I was going to explode," Declan Philpott told C103's Cork Today.

However, Brian remained calm and quickly drove the tractor away from the agitator, allowing him to breathe once again.

"When he pulled out, all the pressure came off me and I just fell to the ground," Declan said.

Kanturk Fire and Rescue arrived at the scene shortly afterward along with local ambulance services and Declan was taken to Cork University Hospital where he was treated for six broken ribs.

Kanturk Fire and Rescue detailed the heroic rescue on their Facebook page, praising Brian for his quick thinking.

"This incident shows the importance of being alert and aware when using farm machinery and never take it for granted how quickly situations can change," they said on Facebook.

The group described Brian Philpott as a "local hero" and said that the 13-year-old had displayed astonishing bravery and quick thinking to save his father's life.

"Without thought, Brian jumped in the tractor and drove forward allowing his father to breathe again."

We would like you to meet a young Local Hero 💥 Brian Philpott 💥 Astonishing bravery of 13-year-old boy who was at hand...