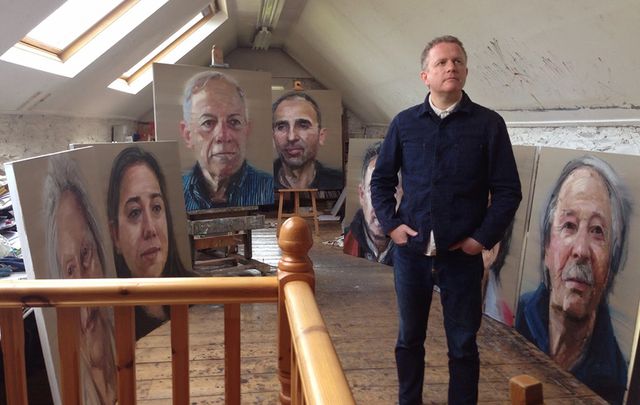 Colin Davidson surrounded by his portraits.

Artist Colin Davidson, 49, is about as old as The Troubles. Raised in Belfast, where he still lives, he’s old enough to have taken his first steps just as Northern Ireland was descending into decades of violent civil conflict.

This week his new exhibition Jerusalem opens at the 92 Street Y’s Weill Art Gallery, where it will run until November 14.

The exhibition, which originally opened to critical acclaim in London, features 12 large-scale portraits of people who live and work in the long politically and religiously contested city of Jerusalem.

Among the sitters are Jews, Muslims and Christians who hail from every social class, including a Nobel Prize winner, a hotel worker and a Holocaust survivor. What unites them and each of Davidson’s arresting portraits is their common humanity and his lighthouse gaze.

Like everyone of his generation in Northern Ireland, Davidson carries the memories of the long years of conflict with him like a tattoo. So when gallery owner Oliver Sears, who shares a background that’s known more than its share of sectarian conflict, and Davidson discussed a new project the artist suggested, remarkably, that Jerusalem would be a less contested theme.

“It was interesting to go to such an ancient city, where there is religious conflict, and where identity is so important aspect, to simply paint individuals from there,” Davidson tells the Irish Voice.

“I wanted to strip away the badges of Muslim, Christian or Jew (the sitters are only identified by their first name) and instead have the viewer ask themselves why they need to know that.”

Uninterested in classical portraiture, Davidson patiently upends expectation and is instead willing to wait for the moment when the sitter finally forgets that they’re being painted and is lost in their own thoughts, their own story.

“Those are the moments I look for, those are moments of truth, there’s an honesty in them where people aren’t giving their best side or showing their best face. They’re just truly themselves,” he says.

That’s the kind of access and prestige that can cement a glittering career, but Davidson isn’t really interested in the pursuit of celebrity.  He’s more interested in capturing the true face each of his subjects, regardless of whether they’re known or unknown to the wider world.

“Even when it comes to someone like the Queen, even though its very difficult in a setting like Buckingham Palace to see her as a human being, I think it’s what I strive for,” he says.

In his most recent exhibition titled Silent Testimony, which he hopes, with the help of a sponsor, will come to New York in the very near future, Davidson reflects that although the Good Friday Agreement and the peace process have transformed Northern Ireland, “There was nothing in it for people who had suffered loss.”

In the 19 years since the agreement there is very little that has been achieved in terms of addressing our violent past, he says. “It really felt to me like a small section of our community was paying for everyone else’s peace,” he says.

Painting 18 people who have suffered loss from every section of Northern Irish society, every walk of life, Davidson’s Silent Testimony asks us to consider their faces, their names and their stories, and most important, their loss.

In a moment where the North’s main political parties are deadlocked and not speaking, the timelessness of the reminder cannot be sufficiently expressed.

“I would love to bring it to the U.S. as well. It’s not remotely about me trying to drag those bad days into the present, or to drag us back into the past. I’m actually painting about right now; I’m painting about what the fall out of conflict is. It’s as contemporary as it gets.”