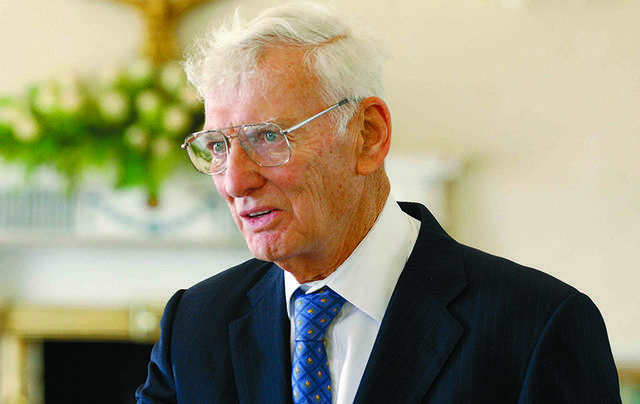 A decade ago, at Barack Obama’s first White House St. Patrick’s Day celebration, the president announced the nomination of my father, Dan Rooney, to be ambassador to Ireland.

In many ways, it was the culmination of his life’s work and interest in the land our ancestors left during the Famine.

My father truly never forgot where he came from – whether it was the North Side of Pittsburgh, or the town of Newry in today’s Northern Ireland.

Many Irish Americans knew my father through his ownership of the Pittsburgh Steelers.

Lesser known to some was my family’s long and strong connection to Ireland.

My father and Tony O’Reilly were the founders, and along with Loretta Brennan Glucksman, the leaders of the organization known today as the American Ireland Fund, the world’s largest charitable organization serving Irish peace and charitable interests.

Beginning in the mid-1970s, my father (and mother) were frequent visitors to Ireland and were deeply invested in Irish culture and in working to bring peace and prosperity to the entire island.

President Obama knew of my father’s work for and love of Ireland.

Although much of President Obama’s focus was on the youth and the future, he was regularly engaged with my father, who was not a young man, on the subject of Ireland and the work that he and so many others had been involved in regarding the peace process.

It’s hard to imagine that the president wasn’t inspired by the hope that was the bedrock of my father’s lifelong commitment to our ancestral homeland.

President Barack Obama and Dan Rooney, in the White House after the Steelers' 2009 victory.

My father was the first U.S. ambassador to visit all 32 counties, something in which he took great pride.

He wanted the interests, vitality and hope of the United States to be a visible beacon around the country, in villages and towns, and not just at receptions in Dublin standing next to VIPs.

Jake Sullivan, who served as deputy chief of staff to then Secretary of State Hillary Clinton, recalled that my father was determined to do what he could to lift the spirits of the Irish people.

“He arrived in Dublin at a moment when Ireland was flat on its back,” Sullivan said. “The financial crisis crushed Ireland in every way — economically, of course, but it also crushed them psychologically.

“And so Ambassador Rooney saw one of his jobs to be someone who could help with the spirit of the people of Ireland — to help point the way to a more positive future, but also to think about what he could do from the point of view of foreign investment in projects that could help jump start economic growth and dynamism.”

Ambassador Rooney also was intent on helping along the ever-fragile peace process in the North.

He formed a close bond with Martin McAleese, who was married to the then president of Ireland, Mary McAleese.

My father, who grew up in the traditional mindset of Irish-Catholic America, eschewed so many of the common beliefs that divided sides.

Instead, he always sought to build bridges. He and McAleese helped arrange for a delegation of UDA men to visit New York and Washington, D.C.

They flew over in early October, 2011, and met with a number of U.S. officials. They also toured economic development projects underway in Washington and in Newark, New Jersey and told their American hosts of their own community’s economic difficulties. Blue-collar workers in Northern Ireland, Protestant and Catholic alike, were suffering just as much as those in the old industrialized areas of the United States.

“They had never heard anything from the loyalist working-class perspective before,” said one of the UDA men, Jackie McDonald.

There were many parallels, he said, between the unemployed and underemployed American workers and the out-of-work Loyalists of Northern Ireland.

“We were welcome in America, thanks to Dan Rooney,” McDonald said. “He gave us the opportunities that no one ever gave us before.”

People in the NFL saw my father as the conscience of the league, somebody who always emphasized the importance of doing what was right, rather than what was expedient.

My father had always believed that if people were given opportunities in Ireland, peace was possible. Now, as ambassador, he was creating those opportunities and was witnessing the results first-hand.

He was always grateful to President Obama for this opportunity. In return, my father brought a message of hope that had been his trademark since first visiting in the 1970s. And when he left, the relationship between the U.S. and Ireland was never stronger.