As crowds flocked to Inch Beach in Co Kerry to soak up the last day of the Irish heatwave on Sunday, one car got trapped in a quickly rising tide. 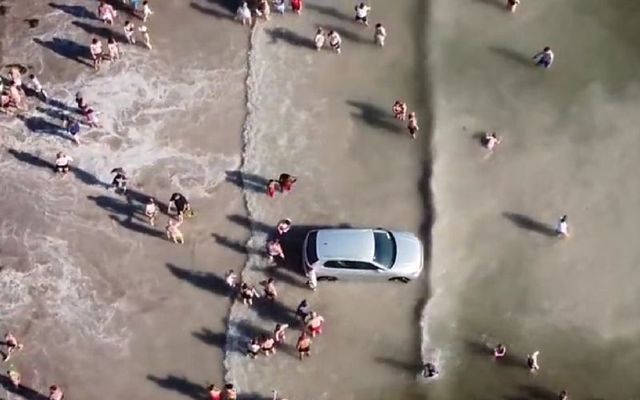 A car became trapped in the surf at a famous Co Kerry beach when the tide came quickly in on Sunday afternoon.

Huge crowds flocked to Inch Beach on the Dingle Peninsula on Sunday to make the most of the last day of Ireland's August heatwave, leading to chaotic traffic and parking.

Several cars parked on the beach itself, while some cars drove right down to the tidal limit on the Blue Flag beach.

One unfortunate car became caught in the onrushing tide, while a viral video showed several more cars queuing up to get off the beach as the tide comes in.

Morning - Traffic chaos at Inch Beach this weekend more than a few cars got wet when parked on the beach and hit with a high tide - reports of traffic backed up for hours in and around the blue flag beach. @kerrytodayrk pic.twitter.com/QF2WenemIT

Trapped vehicles are a regular occurrence on Inch Beach, where motorists often park on the golden sand due to heavy traffic.

Last summer, a family that visited the beach in a campervan became trapped through a full tide after they failed to get the vehicle off the beach in time.

Locals regularly have to deal with traffic congestion at Inch Beach, especially during periods of warm weather, while they are often required to help stranded tourists remove their vehicles from the beach.