The group, which includes schools, businesses, sports clubs, youth groups, and elected representatives, is keen to highlight that the majority of people in Ballymun are "generally upset" with the recent protests. 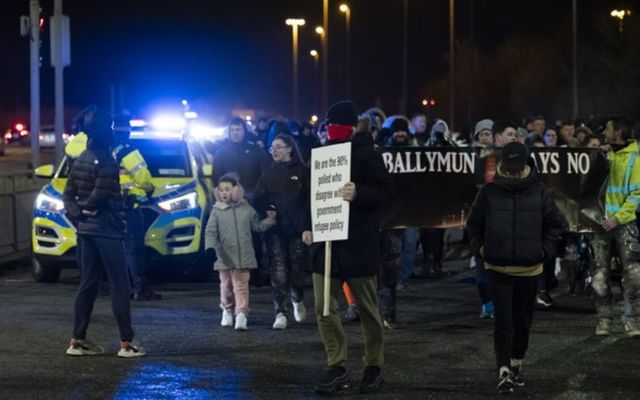 Demonstrators protest against the housing of refugees in Ballymun on Thursday. Rolling News

A large group of community organizations and public representatives in Ballymun have come together to condemn recent anti-refugee protests that have taken place in the area.

The group, which includes local schools, businesses, sports clubs, youth groups, and elected representatives, is keen to highlight that the majority of people in Ballymun are "generally upset" with the recent protests.

In a statement, the group said local Ballymun residents fear that the area's reputation as a "welcoming and diverse community" has been damaged by the recent protests.

"We know that only a small minority of people from the area are taking part, and the abuse is orchestrated by far-right groups," the group said in a statement shared on social media by Dublin Lord Mayor and Ballymun resident Caroline Conroy.

"The people of Ballymun are generally upset with the ‘protests’, and they fear that the reputation of this welcoming and diverse community is being tarnished.

The group said issues such as poverty, housing, homelessness, employment, and health services should not be used by certain groups to stoke up fear and hate of asylum seekers and refugees.

"As organizations and as individuals we are working and we will continue to work collectively to make our area better, bringing out the best in people and fighting for positive change. We are determined to respond to the ‘protests’, including through meeting with the new residents to welcome and reassure them.

"We are redoubling our efforts in our schools and businesses, and in our youth, community and sports groups, and as public representatives, to promote integration."

Joint Statement by organisations and public representatives in Ballymun.

We stand in solidarity with the vast majority of the people of Ballymun in opposing the abuse and hatred directed at refugees and asylum seekers in Ballymun over the last few days.
1/#BALLYMUNFORALL pic.twitter.com/XWE0UXMT8M— Cllr. Caroline Conroy (@caroline1conroy) January 12, 2023

A number of anti-refugee protests have taken place outside a hotel housing asylum seekers in Ballymun since the beginning of the year, with protesters holding banners criticizing the Irish Government's immigration and housing policy and chanting slogans such as "get them out".

The protests have been widely condemned on social media.