The protests at the Ballymun Travelodge, which is hosting more than 200 International Protection applicants, have been described as "embarrassing" and "disturbing." 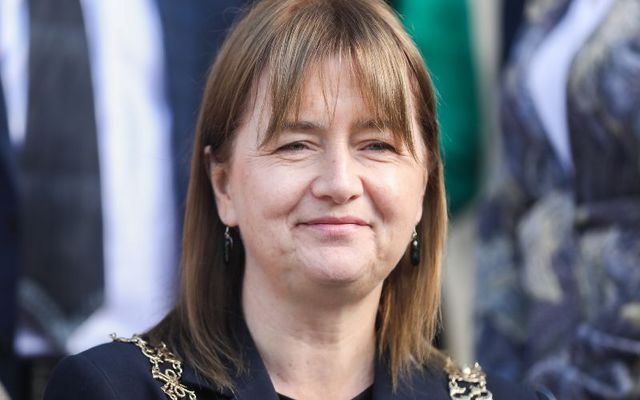 Anti-refugee protests in Ballymun in North Dublin that continued into Monday night have been condemned by activists and Irish politicians.

Protesters gathered over the weekend and through Monday evening outside the Travelodge in Ballymun, which is housing more than 200 International Protection Applicants, including nine children.

Protesters chanted "get them out" and "send them home," while some demonstrators held banners that read "house the Irish, not the world" and "Ireland is full."

Protesters were addressed by members of the anti-immigration National Party and Irish Freedom Party, the Irish Times reported on Monday. The National Party shared photos and videos from the protests on their social media pages, encouraging people to join the organization.

"Ireland has a moral and legal responsibility to provide shelter to those who come to our country fleeing war and persecution," Ireland's Department of Children, Equality, Disability Integration, and Youth (DCEDIY) told IrishCentral on Monday.

"There are currently 221 IP applicants in the Travel Lodge Ballymun comprising of singles and couples and families, 9 of whom are children," DCEDIY told IrishCentral on Monday.

"Over the past year, communities across Ireland have demonstrated great solidarity and welcome for those who come here seeking refuge.

"The Department strongly condemns any attempt to promote division and hostility towards those who come here seeking safety."

Daniel Lambert, a Direct Provision activist, shared photos and videos from the scenes on Twitter. He told FM104: "Government policy has created this situation, not somebody who's come here seeking International Protection."

I never thought we’d see something like this in Ireland. It got very close to the building being attacked.

Imagine being inside with your children.

This is not Ireland.

This is not what we stand for.

These people need to stopped and the lies deconstructed pic.twitter.com/Y9J0DvaPYA

"It's really embarrassing, it's upsetting, it's not what we're about in Ballymun," Lord Mayor of Dublin Caroline Conroy, who represents Ballymun-Finglas on Dublin City Council, told RTÉ's Today with Claire Byrne on Monday.

Conroy, who grew up in Ballymun, said "an awful lot" of the people who were taking place in the protests are "far-right winged protesters."

"They are not locals behind the scenes here on this particular protest," Conroy claimed, adding "It's certainly a minority who are out there protesting against vulnerable people who have nowhere to go."

She continued; "What's really shocking and upsetting is that so much work has gone into Ballymun and shown what we do in a positive light, and this one weekend seems to have destroyed all of the hard work that has been done over the years."

Conroy said she would be meeting with a number of community members on Monday to determine the best response to the situation and "to show people that we are about bringing people in, welcoming people in, showing the real side of Ballymun which is that we're inclusive, that we come together when people need help."

Among the people Conroy will be engaging with is former Dublin GAA star Philly McMahon, also a native of Ballymun. He tweeted on Sunday: "Disappointing to see some of the scenes in Ballymun over the last 2 days.

"From a community that is judged constantly to now judging asylum seekers."

He added: "It has evidence of far rights claws in it. Some forget who we are."

Disappointing to see some of the scenes in Ballymun over the last 2 days. From a community that is judged constantly to now judging asylum seekers. "Criminals, not vetted,it will impact homelessness, all men🤦‍♂️it has evidence of far rights claws in it. Some forget who we are 🇮🇪

Also on Monday, Ireland's Minister for Housing Darragh O'Brien told the press that he was "disturbed" by the Ballymun protests.

"People have a right to protest but in the appropriate place," O'Brien said, "they don't have the right to intimidate people either.

"We've been a welcoming country, and rightly so. We know from our own history what it's like to be people who have had to leave our own shores due to oppression, due to war, due to famine.

"The vast majority of people living in Ireland here are people who support the effort to look after our friends from Ukraine and indeed from other countries where people are fleeing persecution."

He added: "If people have a different viewpoint, they're entitled to it, but they're not entitled to intimidate people."

Minister for Housing Darragh O'Brien has said he is "very disturbed" by the anti-refugee protests which took place in Ballymun in Dublin over the weekend | https://t.co/bAEbADnx6w pic.twitter.com/2munR6g0jf