Archie Naughton, 11, and twin brothers, George and Isaac, 6, suffer from Duchenne Muscular Dystrophy, a disease which will gradually shut off their muscles, leaving them paralyzed and facing a premature death. 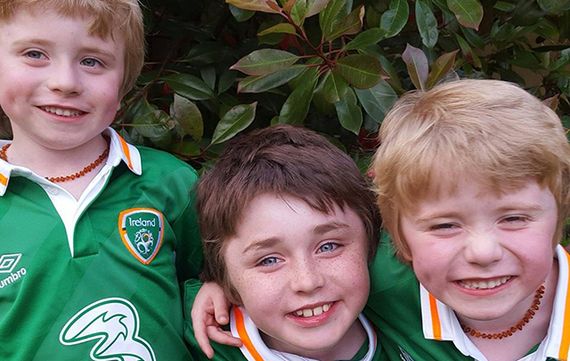 Archie Naughton, 11, and twin brothers, George and Isaac, 6, suffer from Duchenne Muscular Dystrophy, a disease which will gradually shut off their muscles, leaving them paralyzed and facing a premature death. Naughton family.

The parents of three very ill Irish brothers living in Roscommon have welcomed the massive response to their call for help on IrishCentral, including an offer from a Dublin company to help in the construction of a new home suitable for their sons’ medical needs.

As featured in IrishCentral on Thursday, Archie Naughton, 11, and twin brothers, George and Isaac, 6, suffer from Duchenne Muscular Dystrophy, a disease which will gradually shut off their muscles, leaving them paralyzed and facing a premature death unless a cure is found.

Their father Padraig Naughton had bravely reached out to IrishCentral asking for help in a heartbreaking letter on the efforts he and their mother Paula were going to in finding a cure for this devastating disease. Over 50,000 people read the letter of their plight printed word for word since then and the response from IrishCentral readers has been huge, many reaching out to the family to find a way to help.

The boy's mother Paula Naughton said they were overwhelmed by the kindness of those responding. "It is a wonderful thing to see so many respond. Irish Americans and Irish are so generous to us. We can never thank them enough."

One local architect has a design for the new home ready and waiting, and a bill of quantities are currently being drawn up to evaluate the total cost of the home construction, which will include a therapy room and small pool to allow the brothers to continue the exercises that keep their disease at bay. There are hopes that construction can now begin by summer 2017.

While Duchenne is the biggest genetic killer of children in the world even the boys’ parents, nurses Paula and Pádraig Naughton, were unaware of the terminal disease until their three young sons were diagnosed in November 2012. Many of those who have been in contact with the family in the last few days have shared their own family’s experience of living with Duchenne and offered advice and support for the Naughtons.

Others have offered financial support as the family continue to grow their trust, Join Our Boys, and their research foundation, The JoinOurBoys Duchenne Research Foundation, hoping that as well as providing the boys with a home that can accommodate the practicalities of living with their failing muscles and wheelchairs, a cure or treatment may yet be found to save their young lives.

The lives of sports-mad Archie, 11, and Isaac, 6, along with his twin brother, the wannabe chef George, were turned upside down in 2012 as the walking difficulties they had shown in their early years were discovered to be the result of a disease that could see the Naughton parents lose all three sons by their late teens or early twenties.

With their eldest son Archie already forced to crawl up the stairs to bed at night and beginning to fall more often as his legs slowly stop working, a change his mother Paula says is notable week by week, the Naughtons urgently require help in building a new home that will cater for the inevitability of three wheelchairs and a lift up the stairs.

“Every week you can see a deterioration in him,” Paula Naughton told IrishCentral, “because he's at that stage where he's losing everything and gaining nothing. That’s the pain of it because he's with his lovely friends and they're all getting stronger and bigger and he's getting weaker and having less opportunity.

The Naughton family were unprepared for the “catastrophic” diagnoses that changed their lives completely. Already surviving a severe case of meningitis and septicemia when he was two years old, during which he was close to dying, Archie recovered from his illness with a limp in his leg for which he was receiving physiotherapy. As there was no family history of the Duchenne disease, however, both parents and medics took the limp to be a result of the previous bout of meningitis. It was only when a then 2-year-old Isaac showed difficulties in walking that he was also brought to physio and “all hell broke lose”, as Paula puts it.

“To be honest, when they were diagnosed in 2012, we didn't think that anything could be more difficult but the thing you find with a disease like this is that because it robs your children of so much, its robs the community of so much, that as time goes on, it actually gets more difficult.

“As time goes on, the children's needs become greater but you have to have the capacity, mentally, physically and emotionally. I suppose we've been very lucky as local people when we launched the trust, were so amazing.”

For the family, all hope it not lost, however. As Duchenne is normally carried by the mother but Paula is not, in fact, a carrier of the gene, she believes the family is due a miracle.

“We also say we're lucky,” she continues. “We never really felt that we had major problems. It's probably because of our experience at work seeing people so ill.

“We now only have one problem, a big problem called Duchenne, but we only have one real problem in our life. It teaches you deep appreciation and humility really but those things alone are not going to find a solution.

“We very much believe that there are people out there, once they hear about this, they will want to help. They can help and it will happen because two to three people could change the course of history with this. There are projects now waiting to get started that have massive potential and could slow this disease down for everybody but unfortunately, we need a lot of money. That's the problem we have.”

This is set to be a big year for the family in terms of fundraising for both their home and research, with plans already underway to gather some 500 men and woman to run the Women’s Mini Marathon in Dublin this summer, each raising €200 each. Already kindly accommodated to train with his rugby club, although it’s too dangerous for him to play in matches, Archie is also to get running to further the cause, joining the local running club to undertake the Dublin City Marathon. Helped by a Northern Ireland charity, they will provide a special type of running buggy to help the 11-year-old complete the 26-mile race.

“If people feel that they have fundraising ideas, if they're willing to hold fundraisers, they can get in touch and we have a system by which people fill in an event form so they can go through the trustees. (That way) they're cleared so they're covered insurance wise and everything and even if people would follow up on social media, it doesn't cost any money only time but it helps to get the word out, “ said Paula.

Anecdotally, Paula states that there are possibly 200 people living with Duchenne currently in Ireland, a figure that would fall in line with the with the one in 3,500 boys and one in 50 million girls figures quoted worldwide. With the difficulties in talking about the complicated and heartbreaking disease, however, many have not spoken opening about it before now, a silence the family hope to change in raising more awareness in their search for treatment.

“I think it's very interesting that this is the biggest genetic killer of children and then you have two qualified nurses who've heard of muscular dystrophy but not of Duchenne,” she explains.

“Part of that, I truly believe, is because when we launched the trust, people weren't really opening discussing it because it's so difficult. It's very difficult to tell people that your children have a disease that does not have treatment or cure and they're going to be paralyzed and essentially they're going to die very prematurely.

“I think it's understandably very difficult to even comprehend it, let alone to try and publically raise awareness in the hope of finding a treatment or a cure for everybody.”

As the eldest, Archie is more aware of the potential outcome of his disease while his younger twin brothers know that their muscles do not work quite as well as their contemporaries and that they can’t always keep up. While Isaac loves sports and will try to stay with them as best he can, George, Paula tells us, is more interested in ducks and isn't as keen on running around.

“I'm not sure how much of that is really true or is he uses that as an excuse because he struggles with it, it’s kind of intelligent,” she explains.

While the Join Our Boys website is under development, you can get involved now via the Facebook community if you know of any means by which to help with the house construction or in fundraising.