Clerys' Clock, described as “very much the heart and the soul of Dublin," was unveiled on O'Connell Street on January 17 after a refurbishment. 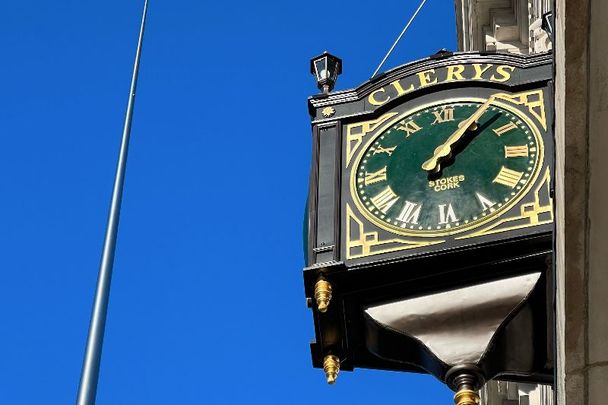 Clerys' Clock on Dublin's O'Connell Street was the meeting point for millions of Irish people, both lovers on their first date and country folk traveling to Dublin for the All-Ireland final or Christmas shopping, for 170 years, until the last decade.

It was even a favorite meeting place for overseas Irish folk to meet their friends when they arrived home.

“See you beneath Clerys' Clock," was a common refrain when folk arranged a meeting in Ireland’s iconic spot, beneath the clock on Clerys store opposite what used to be Nelson’s Pillar on O’Connell Street.

Then the store closed suddenly in 2015, with the loss of more than 460 jobs, and the clock lost its allure as a meeting place. The mobile phone probably also contributed to the spot’s demise as a gathering place.

Now, after a major restructure, the area is reopening soon. With loving care by horologist Philip Stokes, the timepiece has been restored with gold-leafed hands and roman numerals.

Stokes described the clock, which was unveiled at lunchtime on January 17, as “very much the heart and the soul of Dublin.”

Stokes said the mechanical system has been modernized “to keep it going for the next 100 years.”

So “see you under Clerys' Clock” could well be a common comment for the next century. 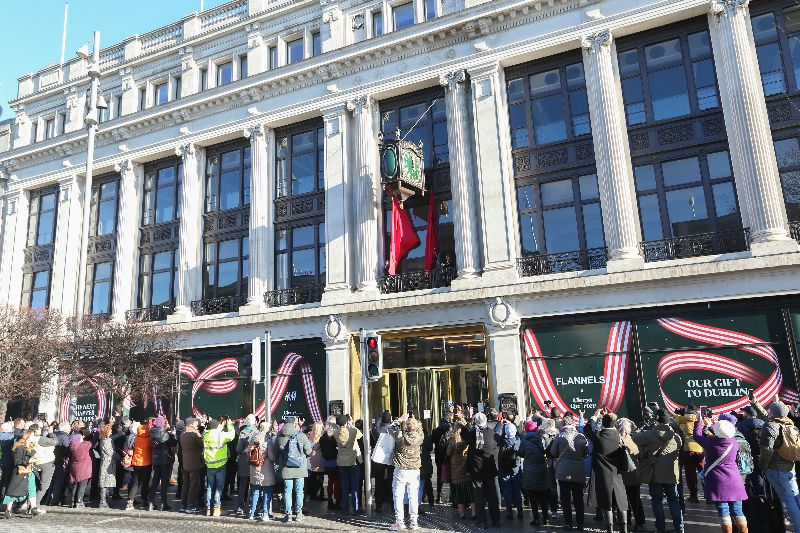 January 17, 2023: A crowd at the official unveiling of the refurbished Clerys' Clock in Dublin. (RollingNews.ie)

Clerys, a 170-year-old department store, was bought for €29 million in 2015 by the Natrium consortium headed by businesswoman Deirdre Foley, a native of Co Sligo.

In 2018, it was sold to a division of new York-based real-estate firm Rockefeller Group called Europa Capital, and its local partners Derek McGrath’s Core Capital and Paddy McKillen Jr.’s Oakmount, for a sum understood to be in the region of €63 million.

The old store and an adjoining building, now called the Clerys Quarter, has been undergoing redevelopment since 2019 as a retail, office, bar, and restaurant complex, as well as a hotel.

The redevelopment has involved the restoration of the historic features of what is one of Europe’s oldest purpose-built department stores, including the colonnaded facade, internal staircases, columns and ceilings, the tea rooms, and the Clerys' clock.

The restoration of the building has been described as tremendous news for Dublin by Lord Mayor Caroline Conroy.

Huge excitement at the Clerys Quarter Exhibition & the unveiling of the restored Cerys Clock. The exhibition is open for two weeks, no booking required. Clerys was the first Department Store in the world. O’Connell St looks great. ⁦@DubCityCouncil⁩ ⁦@DublinTown⁩ pic.twitter.com/Y3sTcnwFQ2

An exhibition called "Clerys: The Archives," detailing the history of the store, will run until January 31.

British retailer Flannels will open in half of what used to be Clerys department store. The other half will be taken by retailer H+M, which when it opens will be the Swedish company’s largest store in the Irish capital. The stores are expected to open in the springtime.