The Wexford County Council confirmed that a bridge at Wilton Bree collapsed on December 25 after torrential rainfall, while a second bridge located at Kilcarbry in Enniscorthy was also "severely damaged" by the flooding. 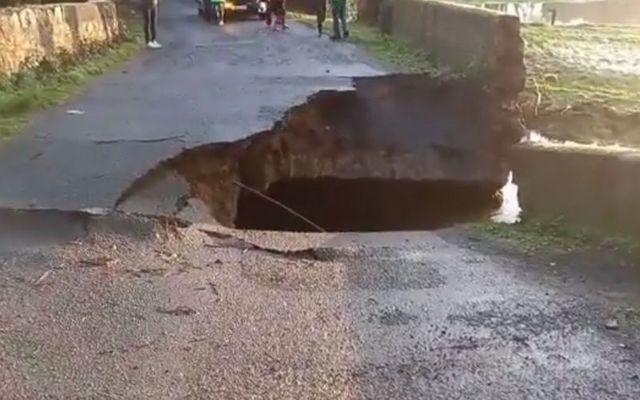 A bridge has collapsed in County Wexford following heavy flooding throughout the county on Christmas Day.

The Wexford County Council confirmed that a bridge at Wilton Bree collapsed on December 25 after torrential rainfall, while a second bridge located at Kilcarbry in Enniscorthy was also "severely damaged" by the flooding.

The road leading to the bridge at Kilcarbry is closed and "will be for some time", Wexford County Council said in a tweet on December 26.

The council urged people to avoid the area, while a Garda spokesperson advised people to exercise caution in low-lying areas such as Kilmore Quay and Rosslare Harbour on St. Stephen's Day.

The council also warned people not to underestimate the depth of flooding on roads and pleaded with people not to drive through any floods.

"Lots of calls to our emergency services from people stuck in cars in floods, impacting our ability to respond to more urgent and more dangerous emergency situations," the council said in a tweet late on Christmas Day.

Several homes in the low-lying village of Bridgetown were evacuated via lifeboat on December 25, while residents at a high-dependency HSE unit at St. Helen's were also rescued by emergency services after the facility became flooded.

A total of six residents and staff members were rescued by members of the Carnsore/Rosslare Coast Guard and the Wexford Fire Service.

The Dublin Fire Brigade also confirmed that there was spot flooding throughout Dublin during Christmas Night, with members of the Balbriggan Brigade involved in flood relief operations throughout Fingal.