Chicago has come out in earnest support of Mayo who is set to take on Dublin in Saturday's GAA All Ireland Senior Football Championship final. 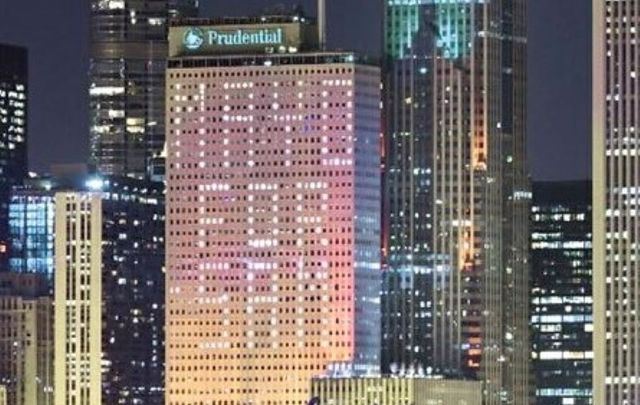 A light display reading "Mayo for Sam" on One Prudential Plaza in Chicago. Courtesy Bob Reiter

Mayo got a dose of unexpected support from Chicago this week as two buildings in the Windy City unveiled "Mayo for Sam" displays ahead of the GAA All-Ireland Senior Football Championship on December 19.

"Mayo for Sam" appeared in gigantic letters on the side of Chicago's One Prudential Plaza earlier this week, and was soon after followed by a similar display at the WinTrust Arena, buildings commonly used to display messages of support for local sports teams.

(For the unacquainted - 'Sam' refers to the Sam Maguire Cup which is awarded to the GAA All-Ireland Senior Football Champion team each year.)

Bob Reiter, president of the Chicago Federation of Labor, which is located in Prudential Plaza, tweeted an image of the gigantic message on Monday night.

“In honor of the fine gentlemen from the County Mayo playing in the All Ireland Game this weekend, we offer this token of appreciation from Chicago’s Unions and the Windy City,” Reiter said on Twitter on December 15, just days before the All Ireland Final:

In honor of the fine gentlemen from the County Mayo playing in the All Ireland Game this weekend, we offer this token of appreciation from Chicago’s Unions and the Windy City. #MayoForSam @MayoGAA pic.twitter.com/w33ROZehBe

The following day, Reiter shared this picture from the WinTrust Arena that featured a "Mayo for Sam" display:

#Chicago’s support for @MayoGAA is unprecedented as the lights of the @WintrustArena glow brilliantly in Mayo’s colors for the Sweeneys of Swinford as they cheer on the lads from Mayo during the All Ireland! #MayoForSam pic.twitter.com/tZTH68q7s7

And then on December 18, Reiter shared this beautiful shot of a Mayo flag overlooking Lake Michigan:

Reiter, whose grandmother was from Glin in Co Limerick, told IrishCentral how the seemingly unlikely displays came to be: "I’m the President of the Chicago Federation of Labor which represents 300 unions that represent approximately 500,000 working women and men. As you can imagine, we have a vibrant Irish labor community.

"One of the unions I represent is the International Union of Operating Engineers, Local 150. This is also my home union. It’s President-Business Manager and my mentor is Jim Sweeney, whose family is from Swinford in Mayo.

"Along with Jim is my good friend Marty Durkan, another 150 guy, whose family is from Tourmakeady in Mayo. Marty played Gaelic Football at the youth level in his teenage years for Mayo. Marty and Jim inspired our quest to support the lads from Mayo."

"Tapping into our Mayo network and enlisting our allies in the building operations community, we were able to rally them to splash Mayo for Sam across the Windy City. Of course, Prudential Plaza and the WinTrust Arena are both iconic buildings representing specific eras in our city’s history."

Reiter said the outpouring of support for Chicago's Mayo campaign across the world has been "invigorating."

"Obviously, the Mayo community in Chicago is excited, but we’ve heard from Mayo folks from at least four continents this week."

Reiter said: "If Chicago’s support for Mayo helps them in their quest for the Sam Maguire Cup, we are here to give it. And while my roots are in Limerick, I am excited to be part of this quest with my friends from Mayo!"

Mayo's footballers are to Gaelic football what the Chicago Cubs are to baseball. Similar to how the Chicago Cubs were baseball's nearly men until 2016 when they finally ended their 108-year wait to win a World Series, Mayo have been knocking on the door to no avail for almost 70 years.

Mayo is now set to take on reigning champions Dublin in the GAA All Ireland Senior Football Championship final this Saturday, December 19 in Dublin's Croke Park.

The westerners are firm underdogs to lift the Sam Maguire Cup against a Dublin team that has won five All Ireland Football Championships in a row, beating Mayo on four occasions in that five-year period.

Mayo has lost three All Ireland football finals to Dublin since 2013, losing each by just one point. They last won the GAA All-Ireland Senior Football Championship in 1951 and have been trying to shake off "the curse" ever since, losing nine All-Ireland finals between 1989 and 2017.

Dublin is widely regarded as the greatest team to ever play the sport and has not lost a championship match since 2014. They have won each game this year by a minimum of 11 points and look set to record a historic six-in-a-row against the underdogs from Mayo.