The number of Protestants going to mass has exceeded the number of Catholics attending services as Catholic mass attendance is on a steep downward trend. 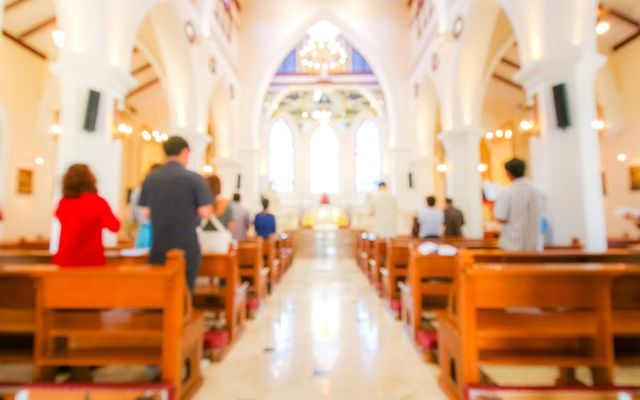 Regular attendance of mass is on a downward trend for Catholics. iStock

The number of Protestants going to church has exceeded the number of Catholics attending services as Catholic mass attendance is on a steep downward trend.

A recent Gallup poll of Catholics and Protestants in the US reveals a steep decline in mass attendance among Catholics, with more Protestants regularly attending church than their Catholic counterparts.

What's more, the results mark the first time that not a single generation group of Catholics has a majority who attend mass regularly. For young Catholics ages 21 - 29, the majority indicated that they attend mass seldom or never.

Meanwhile, the number of Protestants attending remained more or less steady from 2014 - 2017, at 45%, in keeping with Gallup's findings from a decade prior. However, the poll also suggests that fewer Americans are identifying as Protestants.

According to the release, the findings are based on "multiple Gallup surveys conducted near the middle of each decade from the 1950s through the present. The data for each period provide sufficient sample sizes to examine church attendance among Protestants and Catholics, the two largest religious groups in the country, as well as the patterns by age within those groups."

Read More: The truth about St. Patrick's life, from kidnapping to Catholicism

The first and most significant decline in Catholics attending mass took place between the 1950s and 1970s, when regular attendance fell by 20%. It then continued on a steady but slower downward trend, stabilized in the 2000s, but saw a new and significant drop of 6% for the most recent survey.

This trend somewhat mirrors Catholic weekly mass attendance rates in Ireland, which fell from 91% to 30% between 1972 and 2011.

Given the lowest levels of attendance among the youngest generation of Catholics, Gallup predicts this trend will continue in the US. It aligns with a national trend of decreased religious identification. They find "more Americans opting out of formal religion or being raised without it altogether. In 2016, Gallup found one in five Americans professing no religious identity, up from as little as 2% just over 60 years ago."

Do you identify with a particular religion? How often do you attend mass? Share your experience in the comment section.