Captain Sully performed the "Miracle on the Hudson" in 2009, saving 155 lives. 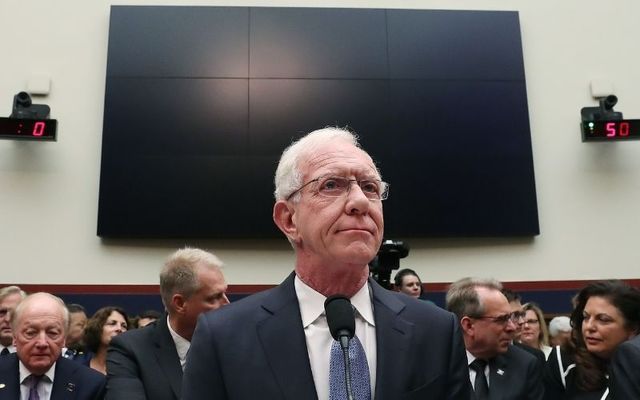 Captain Sully famously landed a US Airways flight on the Hudson River in 2009. Getty

Captain Chesley "Sully" Sullenberger, the US military veteran and commercial pilot who landed an airplane on the Hudson in 2009, has launched a scathing attack on Donald Trump, branding him "unfit for office" after the President reportedly called US veterans "losers and suckers."

Captain Sully attacked the President on Twitter, labeling Trump as "selfish" and a "coward."

Sully, who rose to fame when he safely landed US Airways Flight 1549 on the Hudson River in January 2009, said that Trump had shown "utter and vulgar contempt and disrespect" for those who served and died in the US military with his comments.

"I am a veteran. I volunteered for military service during wartime. So did my father. His generation saved the world from fascism," Sully angrily wrote on Twitter on Friday.

"For the first time in American history, a president has repeatedly shown utter and vulgar contempt and disrespect for those who have served and died serving our country," he continued in a nine-tweet rant.

Captain Sully said that he was disgusted by Trump's comments and said that President had shown no respect for the office he holds.

He said that Trump has failed to uphold the oath he swore when he took office in January 2017.

"He took an oath of office that is similar to the one that each person takes who enters the U.S. Military. But he has completely failed to uphold his oath," Sully claimed. "Now we know why. He has admitted that he cannot comprehend the concept of service above self."

1/9 I am a veteran. I volunteered for military service during wartime. So did my father. His generation saved the world from fascism. pic.twitter.com/0tWKdMYDKs

Captain Sully's scathing attack came one day after the release of a damning article in the Atlantic, which claimed that Trump had branded American veterans as "losers and suckers."

The article cited four unnamed sources reportedly close to the US President.

It reported that Trump canceled a visit to Aisne-Marne American Cemetery near Parks in 2018 to honor dead US soldiers because it was raining and he didn't want to ruin his hair.

"Why should I go to that cemetery? It’s filled with losers," the Atlantic article claimed.

Trump claimed at the time that he was unable to attend the cemetery because the rain had made it impossible to reach the cemetery by helicopter and the Secret Service was unavailable to drive him.

On another occasion, Trump allegedly referred to 1,800 US Marines who died at Belleau Wood in France as "suckers" for getting killed.

American troops and their allies halted the advance of the German army towards Paris at Belleau Wood in 1918 in what was a decisive battle in the First World War.

Trump also reportedly said that he didn't understand why the Americans joined the war on the side of the Allies.

Trump, however, has dismissed the Atlantic article as a "totally fake story".

"It was a terrible thing that somebody could say the kind of things – especially to me because I have done more for the military than almost anybody else," Trump said in response to the story in a press conference on Friday.

Captain Sully, meanwhile, claimed that Trump was unfit to serve and urged his followers to vote against him in November's presidential election.

Sully, who served in the US Air Force for 11 years, has already endorsed Democratic hopeful Joe Biden ahead of the general election.

The retired pilot saved 155 lives when he landed the US Airways flight in the middle of Hudson in what became known as the "Miracle on the Hudson."