Six-year-old Adam King from County Cork stole the hearts of the Irish nation on the Late Late Toy Show on Friday night. 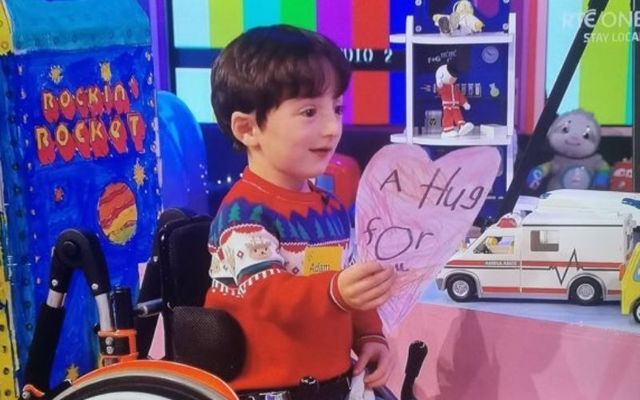 Canadian astronaut Chris Hadfield has offered to "talk space" with the six-year-old Irish boy who stole the hearts of the Irish nation during his Late Late Toy Show appearance on Friday night.

Adam King, who uses a wheelchair due to a condition called brittle bones, told host Ryan Tubridy that his dream is to one day command a space mission from ground control at NASA.

The six-year-old told Tubridy that he couldn't be an astronaut because of his condition but that his dream was to be Capcom (captain of ground control) at NASA.

His appearance on the Late Late Toy Show quickly went viral on social media and came to the attention of famous Canadian astronaut Chris Hadfield, who served as commander of the International Space Station.

Hadfield tweeted that he had been lucky enough to be CAPCOM during many spaceflights and invited Adam to join him in a conversation about space.

"Adam - I’ve been lucky enough to CAPCOM many spaceflights. We should talk space together. Take care, be good - Chris," he said on Twitter after Friday night's show.

Adam - I’ve been lucky enough to CAPCOM many spaceflights. We should talk space together. Take care, be good - Chris@RTELateLateShow https://t.co/XacYA9ncKT

Adam's heartwarming appearance also reached the Irish Embassy in the USA, who promised to reach out to NASA on his behalf in an attempt to bring his dream a little closer to reality.

"Per aspera ad Astra [through hardships to the stars], Adam. Keep looking to the stars young man. In the meantime, we’ll reach out to our friends @NASA & see if they can’t help bring your dreams a little closer," the Irish embassy said on Twitter.

Per aspera ad Astra, Adam. Keep looking to the stars young man. In the meantime, we'll reach out to our friends @NASA & see if they can't help bring your dreams a little closer. pic.twitter.com/DqRZwdziDQ

News of Adam's dreams also reached Herb Baker - a retired NASA manager - who promised to send word to his former colleagues at Capcoms.

"Hey Adam - Loved seeing you on the #LateLateToyShow. I'm retired from @NASA
but I have some friends that are Capcoms, like @Astro_Jessica
, and I'll bet they would love for you to achieve your dreams and talk to astronauts from the ground when you grow up, like they do! Ad Astra!"

The six-year-old from County Cork endeared himself to the entire Irish nation with his virtual hug card and his tear-jerking reunion with his favorite hospital porter - John Doyle from Temple Street Children's hospital.

The look of pure joy on Adam's face when he saw Doyle, who he described as his hero, would have brought a tear to a glass eye, while the ensuing conversation between the pair was equally wholesome.

Who needs a (virtual) hug from Adam King right about now?#LateLateToyShow pic.twitter.com/4pMqwpEty6

Adam's appearance was arguably the highlight of an uplifting night on Ireland's biggest television event, which raised more than €5.2 million for Irish children's charities with its new Toy Show Appeal.