Cork City Council honors the centenary of the Burning of Cork

The Burning of Cork in December 1920 was one of the most notorious events during Ireland's War of Independence. 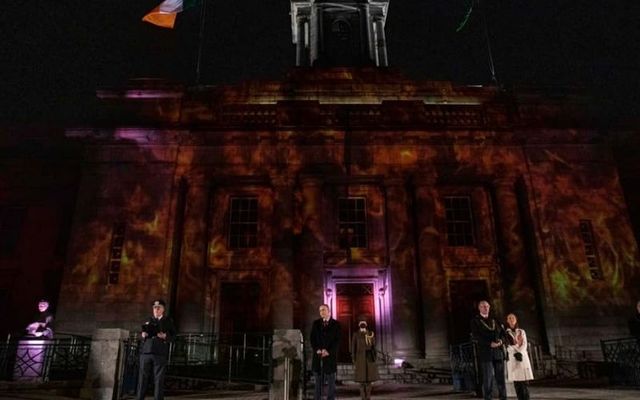 Cork City Council honored the centenary of the Burning of Cork with a series of commemorative events on Friday night and Saturday morning.

More than 40 businesses and 300 homes were destroyed on the night of December 11 into the morning of December 12, 1920, when British forces consisting of RIC Auxiliaries, Black and Tans, and British Soldiers carried out a horrific act of retaliation in response to an IRA ambush.

Cork City Council marked the 100th anniversary of the events with a  series of COVID-compliant commemorations that began on Friday, December 11.

Parts of Friday night's ceremony were pre-recorded earlier this week on St. Patrick's Street, which was at the heart of the destruction 100 years ago.

The pre-recorded segment included bagpipers from the Cork City Fire Brigade who played "Amazing Grace" as virtual flames flickered on the St. Patrick's Street buildings, while a vintage wheel escape appliance was also placed on the street to mark the occasion.

Taoiseach Micheál Martin attended the ceremony and also recorded a message to mark the centenary.

"As we face the challenges of the future, let us draw upon the sense of resilience and common purpose that underpinned the revolutionary generation of Cork a century ago," the Taoiseach said in his three-minute video.

On Saturday, Cork City Council marked the centenary of the burning of Cork City once more in addition to commemorating the Dillon's Cross Ambush and the Delany Brothers who perished in the act of reprisal.

At 10:15 am on December 12, Cork Lord Mayor Joe Kavanagh unveiled a plaque commemorating the Dillion's Cross Ambush before he attended the unveiling of the Burning of Cork Commemoration Mural at noon at the Middle Parish Community Centre.

The Lord Mayor will join Chief Fire Officer John Ryan later on Saturday at the official installation of the heavy brass standpipe used by the Cork City Fire Brigade to extinguish the blaze 100 years ago and will also lay a wreath at the Delany Monument on Dublin Hill in Cork City at 4:30 pm.

There will additionally be a remembrance mass in the Cathedral of Saint Mary & Saint Anne honoring all those who died in the War of Independence in 1920, especially Tomás Mac Curtáin and Terence McSwiney; two former Lord Mayors of Cork who died in the conflict in 1920.

The Burning of Cork City

The 1920 attack on Cork City was one of the most notorious incidents of the War of Independence and was carried out in retaliation for a series of IRA ambushes, including the Kilmichael Ambush and the Dillon's Cross Ambush.

The Dillon's Cross Ambush was an attack on the Victoria Barracks in Cork, which left one British officer dead and 12 other soldiers seriously injured.

British soldiers responded by shooting, looting, and burning their way through Cork City, reportedly even firing at members of the Cork City Fire Brigade as they attempted to extinguish the blaze.

The attack also resulted in the deaths of two volunteers - Jeremiah and Cornelius Delany - who were shot dead in their home by British forces. Meanwhile, more than 2,000 Cork City residents were left jobless following the attack.