Bill McGlashan, one of the co-founders of The Rise Fund, has been charged in Operation Varsity Blues. 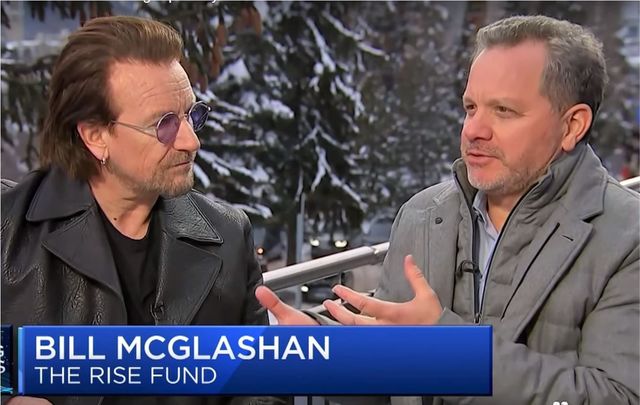 Bill McGlashan is among those indicted by the FBI this week

Bono’s business partner Bill McGlashan has been charged in the college fraud scandal that saw dozens of people charged by the FBI this week.

Named ‘Operation Varsity Blues’ by the FBI, the investigation charged 33 wealthy parents this week in a scheme to buy their children’s entrance into various American universities.

McGlashan and U2 frontman Bono are among the founders of The Rise Fund which “is committed to achieving social and environmental impact alongside competitive financial returns.

As of Thursday, McGlashan is still listed on The Rise Fund’s website among the founders who are described as “a group of experienced investors with a deep personal and professional commitment to driving social and environmental change.”

In January, McGlashan and Bono were in Davos to discuss extreme poverty:

Read More: Note to Irish and US parents: college not the only path for your cherished offspring

On Wednesday, Vulture reported: “According to the criminal complaint filed on Monday, McGlashan donated $50,000 to the college prep service run by William Rick Singer that is the heart of the racketeering case.”

“In exchange for the money, Scott arranged for McGlashan’s son to take the ACT entrance exam at a facility controlled by Scott’s Key Worldwide Foundation. Someone involved with KWF would then make sure the boy’s test answers were corrected.”

“The FBI also has recordings of phone conversations in which McGlashan talks about having a fraudulent athlete profile worked up for his son so he can be admitted to the University of Southern California as a recruit.”

Andrew Lelling, U.S. District Attorney of Massachusetts, called the overall case “the largest college admissions scam ever prosecuted by the Department of Justice.”

McGlashan, founder and managing partner of TPG Growth, has stepped down from his role on the board of STX Entertainment in the wake of the charges, Deadline reports.

An internal memo from STX Entertainment founder and CEO Robert Simonds read: “As you may know, our board member, Bill McGlashan, has been placed on administrative leave at TPG and will be stepping down from our board.”

“This has absolutely nothing to do with his involvement with STX.  Please know that TPG remains fully committed to our success. David Bonderman (Co-Founder of TPG) and Mike Stone continue to sit on our Board and TPG will fill Bill’s board seat in the next few days.”

Actresses Lori Loughlin and Felicity Huffman are among those who have been arrested as well. Bribes have reportedly ranged from “a few thousand dollars” all the way up to $6 million. The scheme spanned six states between 2011 and 2019.