Dave Sylvester, the "human high5," is bringing his 'Big Dave Hugs the World' tour to Ireland and Northern Ireland next month. 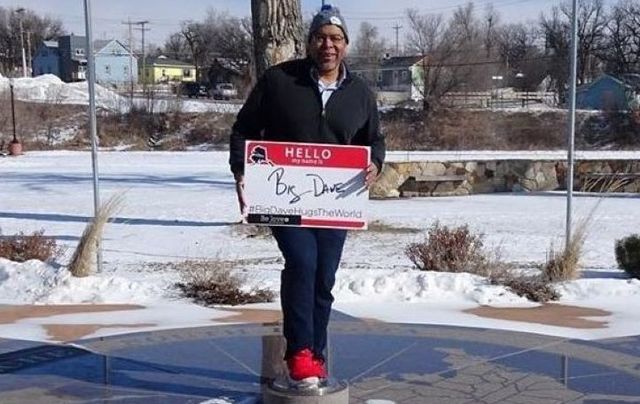 'Big Dave' Sylvester is heading to Ireland to spread some joy in September. @HumanHigh5, Facebook

Dave Sylvester, known affectionately as ‘Big Dave,’ is on a mission to spread a bit of joy around the world with his project “Big Dave Hugs the World.”

Next month, he’ll be traveling to Dublin and Belfast as he kicks off his 80-day world tour.

Sylvester told IrishCentral: “After my friend was killed in the World Trade Center, I adopted a mission to enhance the world one interaction at a time.

“I am just a guy that wants the world to smile and has embraced hundreds of thousands in 50 states and 37 countries to achieve it!” Sylvester says on his website.

“I am just looking to hug as many folks as I can and this that it would be good to offer victims families an embrace.”

Despite visiting all 50 states, and places in Asia, Africa, and Australia, Big Dave isn't done yet. Of his upcoming trip, he says: “This global goodwill tour is the next step in an evolving journey that began over 18 years ago on September 11, 2001, and half a million hugs, high5s, and bits of happiness later - I am still huggin’ strong!”

At each of his stops, which include Ireland and Northern Ireland, Sylvester will set up a so-called Hug Hub, “a place where people can come and get hugs, high5s, smiles, and walk away with a bit of happiness.”

Sylvester will begin his next tour on September 12, where he will be offering hugs and high fives at the New York City 9/11 Memorial in memory of his friend Kevin Bowser who was killed during the attacks.

Then, he heads for Europe with his first stop being Ireland. On September 14, Sylvester will be in Dublin at The Little Bird Yoga Cafe, the charity Can-Teen cancer support group, and possibly Lululemon.

Sylvester shared that the office of the Dublin Lord Mayor has reached out about organizing a meeting during Sylvester’s Dublin tour:

Do you know this guy…? it’s cool if you don’t because I don’t him either. BUT, what I do know is that he is the Lord...

On September 15, Big Dave will be in Belfast at Queen’s University, and possibly the Belfast Chamber of Commerce and the Titanic Museum.

Read More: WATCH: Irish man reunites with American tourist he saved from drowning over 50 years ago

After Ireland, Sylvester will travel to The UK, France, Germany, Spain, Italy, India, Japan, Australia, New Zealand, South Africa, Brazil, and other countries until he arrives back in his native Philadelphia to spend Thanksgiving with his family in November.

Have you ever gotten a hug from Big Dave? Let us know in the comments!