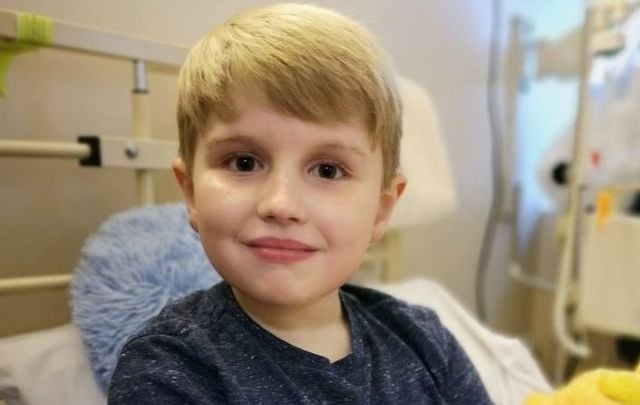 Baxter Browne requires 'radical' medical treatment only a few months after his mother died in a freak accident. GoFundMe

Baxter Browne, a 6-year-old from Co Louth, is battling a rare congenital autoimmune disease that has been diagnosed only a few months after his mother’s tragic death.

A GoFundMe was launched this week for Baxter by his family, who says he only recently began showing signs of  SCID (severe combined immunodeficiency).

On the GoFundMe, which is aiming to raise €50,000, Baxter’s family wrote: “Baxter is a funny, energetic and incredibly loving and caring six and a half year old. Sadly, Baxter hasn't been well lately. What started out as a slightly concerning case of yellowing pupils has turned out to be something much worse.”

“Following four weeks of illness (almost all of it spent in Crumlin Children's Hospital), Baxter has been diagnosed with SCID (severe combined immunodeficiency) a congenital autoimmune disease; something that will require radical treatment in the form of chemotherapy & bone marrow transplant.”

“To make matters worse, the treatment for Baxter's condition is not available in Ireland.”

The family explained that Baxter will have to travel to Great North Children’s Hospital in Newcastle, England to receive the proper treatment as it is only one of the two units in the entire UK and Ireland that performs bone marrow transplants for children with severe immune deficiencies.

“The treatment itself will initially involve aggressive chemotherapy, followed by a bone marrow transplant, and long periods of isolation.  A horrible thing for anyone to face; especially a six-and-a-half-year-old.”

More upsettingly, Baxter is to embark on this journey only a few short months after the accidental death of his mother, Lynn Browne, who passed away on Mother's Day. Kenneth, “Baxter’s fantastic father,” will be alongside his only child every step of the harrowing journey.

Baxter with his parents Lynn and Kenneth

"However, Kenneth will not only be out of work for this time and a period afterward while Baxter recovers, but he will have the additional cost of being in the UK for that time.”

The family acknowledged that the final cost of Baxter's medical care could fluctuate given how he responds to treatment. They assured donors that every cent raised will be going to Baxter and his father.

They added:  "It is truly devastating that Baxter is going through this right now and asking for financial assistance isn't easy. However, any support at all is deeply appreciated and will go a long way to giving a little boy back his life."

You can support Baxter on his GoFundMe page here.