11 arrests made at anti-lockdown protest in Dublin

Police arrested anti-lockdown protesters at the High Court in Dublin for a "persistent lack of compliance with Public Health Regulations." 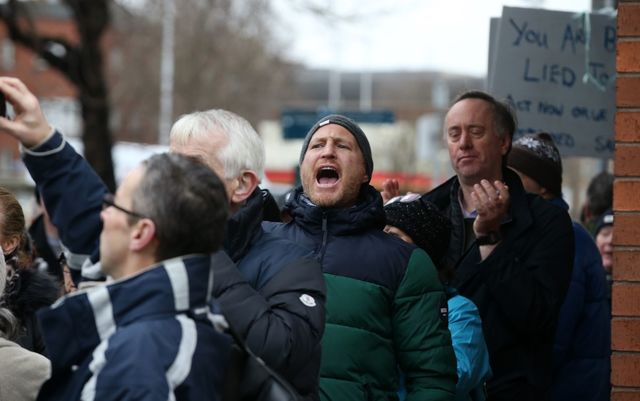 Police in Dublin arrested 11 people took part in an organized gathering on January 20, despite COVID-19 health restrictions. The anti-lockdown protest coincided with the court appeal by Gemma O'Doherty and John Waters over coronavirus restrictions.

The arrest of 11 people took place outside the High Court, on Inns Quays, in Dublin city at about 9:45 am on Wednesday, Jan 20. A number of anti-lockdown protesters had gathered as Gemma O'Doherty and John Waters arrived at court to appeal against the "legality" of the COVID restrictions.

Currently, Ireland is in Level 5 lockdown. This includes staying at home wherever possible and, among other things, a ban on organized gatherings.

In a press statement, the Irish police said "An Garda Síochána has been consistent in our graduated policing response (engage, explain, encourage and, as a last resort, enforce) to supporting Public Health Regulations and guidelines in line with our tradition of policing by consent. Garda members engaged with the gathered protestors over a period of time.

"Following persistent lack of compliance with Public Health Regulations and directions from An Garda Síochána, Gardaí deployed Public Order Personnel to support uniform Gardaí who proceeded to make lawful demands for names and addresses from a number of protestors.

"11 persons (6 males/ 5 females) who failed/ refused to provide names and addresses following lawful demand were arrested in accordance with section 31(a) The Health Act 1947."

One man who further refused to provide his name and address has been charged and appeared before District Court 4 at the Criminal Courts of Justice. He has been remanded in custody to appear before Cloverhill District Court on Thursday

Three men and one woman were charged with offenses and released on station bail. One man and four women were issued with fixed payment notices. One further man has been released, pending a file for the Director of Public Prosecutions.