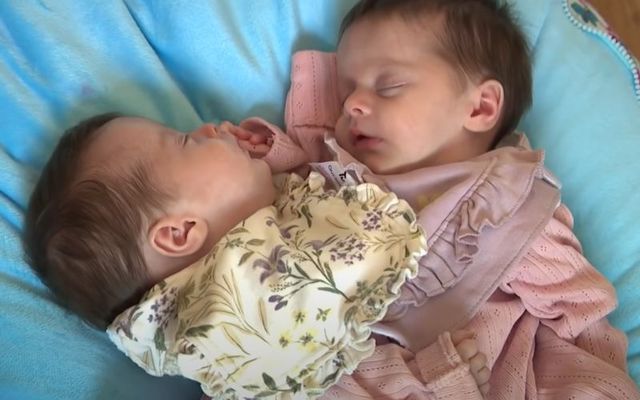 Co Antrim twins Annabelle and Isabelle Bateson are attached from the chest to the pelvis and share a bladder, bowel and fused leg, but have separate hearts.

Conjoined twins affect around only one in every 2.5 million pregnancies, reports BelfastLive.

The girls' mum and dad, Hannah and Dan, both in their 30s, have been together for 14 years and married for six, and struggled to become parents.

Co Antrim mum Hannah said: "It was a very long journey but absolutely worth it," Hannah told  Phillip Schofield and Holly Willoughby on This Morning.

"We tried for quite a few years to have [a baby], I was very overweight as well which didn't help so we couldn't get any treatment until I lost weight, which I did.

"As soon as we started treatment, our first cycle, we conceived the girls."

She added: “We went for an early scan and there was one heartbeat, and then we got the big shock that it was twins and that we had to see the consultant at the local hospital. Then as we saw another scan it dawned on us and I said, ‘are they conjoined?’, and he said ‘yes, I think they are’."

She continued: “It was the most strange first pregnancy. We felt in limbo...

The babies were born  in London's University College Hospital and were delivered by a specialist team, reports ITV.

"We hoped for the best. They were so determined and the fact we got to 35 weeks in itself was a miracle. We were preparing for the worst case [scenario] or very sick babies, but surprisingly, the girls were born so well. Once we heard those cries in delivery it just changed the whole tone. We weren’t prepared for it to go so well.

She said "they are very determined wee girls".

"It’ll be very long and different challenges for them both, and they will probably be going - for surgeries for most of their lives, but we’re hoping that their quality of life should be good.

"I think they will fly through it and it’ll be more challenging for us!

"We said before the girls were born, we were sitting in Great Ormond Street, and we said, 'It is a very scary place to be thinking you are going to have sick children, but if we are coming back here for the next 18 years, it means the girls have survived'.

"So our whole perspective has shifted," Hannah added.

The next challenge for the family will see the babies undergo separation surgery at Great Ormond Street Hospital, the leading hospital in Europe for separating conjoined twins, according to the Independent.

"Their wee bodies are different. The girls will have prosthetic legs, they'll have one leg each and a prosthetic leg each," said Hannah.

The surgery had been planned for the end of May but has been delayed because Hannah and the two children caught COVID shortly after leaving the hospital.

“They’ll be going for surgeries for the rest of their lives and we’re hoping their quality of life should be good, they’re going to fly through it," she added. "It’s going to be more challenging for us.”

The family is fundraising to help pay the cost of traveling back and forth to London.