Irish immigrant Ann Bamford helped 42 slaves escape to Canada between 1842 and 1858, using a home in Manchester, New Hampshire, to hide them. 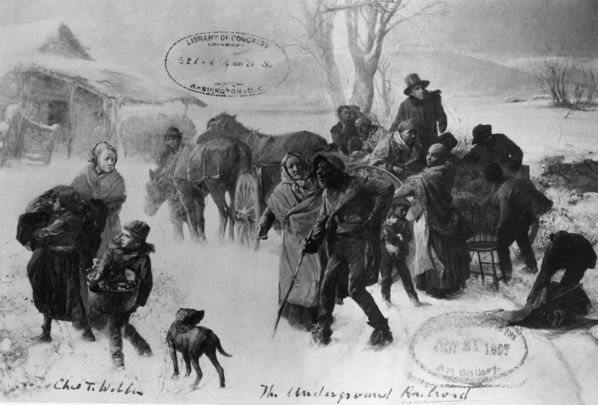 Circa 1850: A painting entitled The Underground Railroad by Charles Webber. Getty

A plaque has been erected in Manchester, New Hampshire, to pay tribute to Irish abolitionist Ann Bamford, who served as a conductor on the Underground Railroad.

The plaque was installed as part of Black History Month at 860 Elm Street, close to Bamford's former residence on Manchester Street.

Bamford helped 42 slaves escape to Canada between 1842 and 1858, using a home on Manchester Street to hide them.

Stan Garrity, a retired Manchester Fire Department captain who led the campaign, told the Boston Globe that he hopes to erect more plaques around the city to raise awareness of Manchester's black history.

"This is just one small thing, you know. We have a lot of Black history. And so I just want to get it out there so people know," Garrity told the Boston Globe.

Garrity, who is a member of Manchester's Heritage Commission, said he had been working on the project for about two years before the plaque was erected on Feb. 2.

He said he first discovered Bamford's story when reading an article from October 1902, which described how the Irish immigrant helped 42 slaves to freedom on the Underground Railroad.

"I don’t think for one moment that Ann Bamford was the only [abolitionist], but this is the one we were able to prove, you know, that she was there," he told the Boston Globe.

Garrity discovered that Bamford left Ireland for Canada before moving to Manchester with her husband to find work.

She died in 1863 and is buried at Piscataquog Cemetery in the city, Garrity said on his Facebook page "Black History of Manchester".

He revealed that the plaque cost about $1,000 in private donations and now plans to create something akin to a black historic trail in Manchester.

He is now focusing on campaigns to honor Cornelius Thornton, a young slave who enrolled in a Manchester school after being brought to the city by two Civil War soldiers, and Samantha Plantin, the first black woman to own property in the city.