Despite his anger, Andrew McGinley has vowed to help his wife Deirdre Morley in any way he can while also working to preserve the memory of their three children. 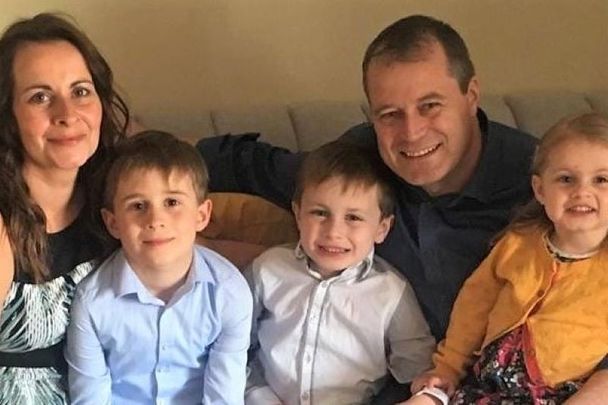 Andrew McGinley, whose three young children were found dead in their Dublin home in January 2020, says things will never go back to normal with him and his wife Deirdre Morley, who was found not guilty by reason of insanity for her children’s deaths.

“With regards to Deirdre, I struggle a lot because all I really hear is Conor’s last words. They resound in my head quite a lot," McGinley recently told the Irish Mirror.

“So, there is no future I suppose, with myself and Dee.”

On January 24, 2020, the bodies of Conor (9), Darragh (7), and Carla (3) McGinley were discovered in the family’s home in Newcastle, Dublin. Deirdre Morley, the children's mother, was charged with their murder but has since been found not guilty by reason of insanity and has been committed to the Central Mental Hospital.

The Irish Mirror reports that during Morley’s trial, it emerged that Darragh’s last words were “Stop mammy. What are you doing,” as she placed a bag on his head.

While an inquest into the children's deaths was opened in January 2020, it was adjourned at the time of Morley's trial. The Irish Independent reports that It is expected to resume this year, but McGinley admits: "It will be tough to go through all the details again. It feels like the kids only died six months ago. It’s been two years.”

Still, McGinley says he is “happy” to help Morley’s treatment team or legal team in any way if he can, and that Morley is aware of that. It is understood that Morley could be released within five years if her doctors feel her condition has improved enough.

McGinley told the Irish Mirror: “[If she is released], that’s their decision. I’m not the professional. It’s not something I’ve given any detailed thought to. But I think there’s a road to recovery for her. I think I’ve a lot of faith in her current treatment team.

“I’ve spoken to them and it’s probably the first time I’ve been engaged with her treatment. For me, it should have been happening since 2018.”

McGinley says he has in recent months received his wife’s medical records from Ireland’s Health Service Executive (HSE)and from St. Patrick’s Mental Health Services, where she was receiving care prior to the tragedy. Morley gave her consent for McGinley to receive the records.

The records from the St. Patrick’s Mental Health Services, however, were redacted, which McGinley says “effectively are no use to anybody.”

“A lot of people say how am I not angry," he told the Irish Mirror, "well I swear to God I’m angry with certain people and certain things that are coming up.”

Despite his anger, McGinley is dedicated to preserving the memories of his beloved children through charity initiatives As Darragh Did, Conor’s Clips, and A Snowman for Carla.

The grieving father regularly shares photos and videos online of the family's happier times. He says: “I get more comfort going back to places where we were rather than being up the grave. We brought the kids to Glendalough. There were happy memories from that.

“I think those clips that I put up show that they had a happy childhood and they were loved by both of us.

“I still don’t understand how we went from that to where we are now.”

I spent most of today in Glendalough, following in the footsteps of 2 intrepid explorers 🥰🥰🥰 pic.twitter.com/C8PzzaWMYk