The Sisters charged adopting American couples more depending on how cute the baby was. 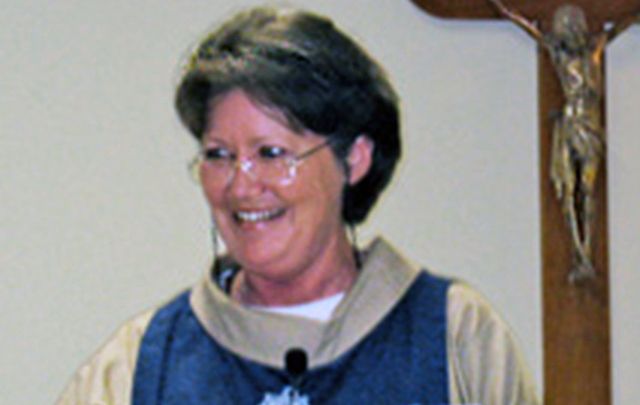 Sister Brigid. The Missionaries of the Heart of Jesus / The Irish Post

A New York nun has told the incredible story of how she found her birth mother in Ireland over 50 years after she was sold to her adoptive parents.

Sister Brigid O’Mahoney told the Irish Post she was born in Co. Cork at the Bessborough Mother and Baby Home in 1954.

Her Texan parents had been too to old adopt an American baby, but their parish priest had helped them put in an application to become parents to an Irish child.

“As soon as I could think, my American parents told me I was from Ireland, from a work home,” the nun – who lives with the Missionaries of the Heart of Jesus in New York – told reporter Erica Doyle Higgins.

“They explained to me that babies were sold to American parents, and that I was lucky enough to be sold to them as many of the children in these homes never got out. I was adopted first, I came over just before I was two years old, and they went back to Bessborough and got my brother Gerard who was five at the time.”

Her parents were made to pay what they told her was “quite a hefty sum,” although they never told her the exact amount.

“I asked how much was it and she said it was a good bit but never gave me an actual amount that the Sisters charged but almost made it sound like there was a range, a lower range and an upper range depending on how cute the kid was, – and she would say to me, ‘And you were cute!'”

Her father died young and, although she was not close to her mother for decades, she never made any attempt to seek out the Irish family she had left behind as a child.

“As I got older I realized that the Irish mothers who had babies out of wedlock were ashamed, and, normally hid it from families, so I thought there’s no way I’m going to try to find some dear poor woman and potentially wreck her life,” she said.

But a surprise letter turned all that on its head. “In 2011, a letter came to my house from another child who had been in Bessborough and she told me the law had changed and she found her mother, and asked if I wanted to find mine.”

Ireland’s Health Service Executive (HSE) were asked for all the details relating to Sr. Brigid’s early life but the response deeply disappointing for the nun. Almost all details had been blacked out – all bar one key giveaway.

Enclosed was a letter from her birth mother and a half sister asking the HSE for help tracing her in 2002.

Read More: One US woman's desperate 44-year search for her Irish birth mother

“When I saw the letter, I said oh my God, this woman is looking for me, I need to respond.”

As with most of what was enclosed in the file, the key details had been struck out. But one remained and it revealed the letter had been sent from Tipperary.

Sr. Brigid wrote to the Tipperary Star with her story and a friend of her birth mother read about it and told the family.

“That was the end of 2012 and we’ve been connected ever since,” she told the Irish Post.

Once she got in contact with her birth mother Sr Brigid learned that her mother was 19 years old when she gave birth her at Bessborough, where she had lived for two years, after which she had been discharged following the adoption.

“Her memory of Bessborough is that it was an intense amount of work,” she noted.

“They worked those girls to death including, when it was time to cut the grass outside, they would go outside in any kind of weather on their hands and knees and pull the grass by hand for hours, do laundry and wash windows three or four stories high.

“Anyone of those girls could have fallen out, there was no protection or safety. They worked them constantly.”

If that wasn’t unsafe enough when the time came for Sr Brigid’s mother to give birth she found herself left alone in a bathtub with only her howls of agony for company.

“She said she screamed and screamed for hours as she was in so much pain and no one helped her. Finally I plopped out.

“I just thought, dear God in Heaven, what are they thinking? I can’t imagine what she went through – and she doesn’t have one iota of resentment.

“I was concerned that would be traumatizing for her, to have been treated the way she has been treated, and to have had her child stolen by nuns and to find out her child was a nun.

“I said I’ll come incognito, I won’t wear my habit, I will not put her through that.”

But to her amazement her mother had no problem with nuns or her habit. Sr. Brigid touched down at Shannon Airport to be greeted by 13 siblings and a mother she was shocked to find she looked identical to her.

I looked at her and said, ‘I’m looking at myself.’

“I was frightened, but she said ‘it’s like you went away for a little while and now you’re back,’  she picked up our relationship from the moment I left all those years ago.

“The family was so warm and accepting and loving,” she continued. “In their minds I was coming home. In my mind I was visiting.”

Even if her mother seems to bare no will towards the sisters at Bessborough, Sr. Brigid recoils when she thinks about what she endured at the home.

“If you come at this as just a human being, it’s horrifying. It’s absolutely horrifying.

“That intensifies when you think these were nuns. It renders me speechless that anyone could treat people that way, and anyone who supposedly represents God. It’s mystifying.”