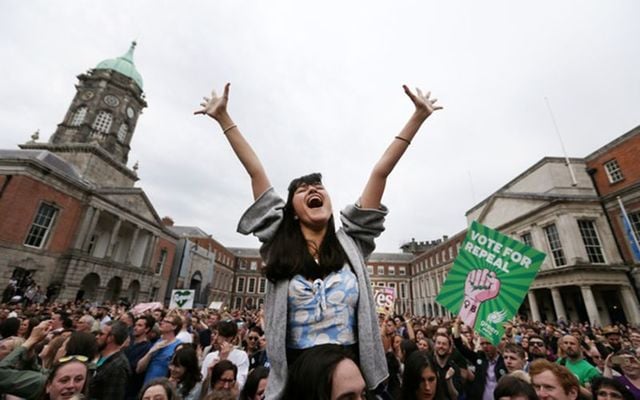 Pictured Amelia Goonerage from Dublin joins Yes campaigners celebrationing their win in Dublin Castle after the the yes vote won the Irish referendum to repeal the 8th Amendment. Sam Boal/RollingNews.ie

Irish President Michael D. Higgins made history on Tuesday when he signed the Thirty-Sixth Amendment to the Constitution Act 2018 and repealed Ireland’s constitutional ban on abortion.

Ireland’s constitutional ban on abortion, the Eighth Amendment, was on Tuesday officially repealed as the Irish President Michael D. Higgins signed the legislation formally marking its removal from the Irish constitution.

In May, the Irish public voted by 67 percent to repeal the ban but the formal enactment of the referendum was postponed as individual’s mounted appeals against the results.

History made. The President has this evening signed the Thirty-Sixth Amendment to the Constitution Act 2018, which takes immediate effect.

The 8th Amendment is thus repealed, and Ireland’s constitutional ban on abortion is officially lifted. #8thRef

The last of these appeals were dismissed by the Supreme Court last month, paving the way for President Higgins to sign the Thirty-Sixth Amendment to the Constitution Act 2018. This act allows for the article in the constitution containing the ban on abortion to be replaced with: “Provision may be made by law for the regulation of termination of pregnancy.”

Read more: Ireland’s era of guilt and shame is over and the Catholic Church needs to buck up

The 8th amendment is now officially gone from our constitution. So many of you worked so hard to make this a reality. Legislation to Cabinet next week and into Dáil in October pic.twitter.com/PVO1Lw536w

The Irish Minister for Health Simon Harris has already announced that legislation providing for abortion will be brought before the Dáil (Irish parliament) next month with the aim to have the legislation enacted by early 2019 at the latest.

Are you happy to see the Eighth officially repealed? Let us know in the comments section, below.