Abood Al Jumaili, a GAA ambassador who was born in Baghdad and is now an Irish citizen, says it is "insulting" that he has been denied entry to the US because he was born in Iraq. 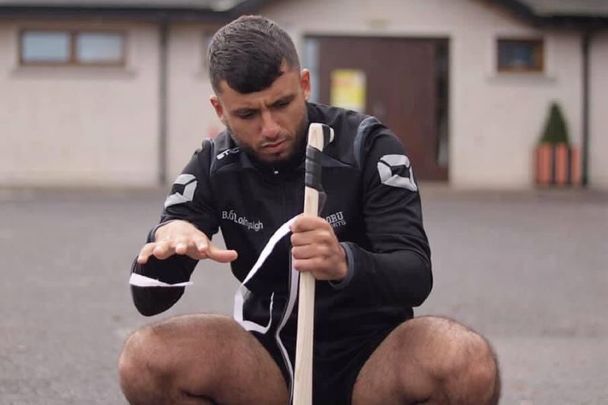 Abood Al Jumaili, aka Bonnar Ó Loingsigh, is an Irish passport holder who, as an ambassador for Dublin GAA, was preparing for a trip to the US to engage with Irish American groups about Irish sports.

However, Al Jumaili said on Twitter on Tuesday that he received an email saying that he had “been rejected entry to the US because I was born in Iraq, even though I am an Irish citizen."

Share my journey with them and meet with several Irish and American organisations. But today I have received an email to say that I have been rejected entry to the US because I was born in Iraq, even though I am an Irish citizen.

“I was shocked and still am,” he wrote on Twitter. “A mission that I have preparing myself for and looking forward to denied because of where I was born?!”

I was shocked and still am. A mission that I have preparing myself for and looking forward to denied because of where I was born?!

Pennsylvania Representative Brendan Boyle, whose father was born in Co Donegal, reached out to Al Jumaili on Twitter saying that his staff was investigating and trying to get him into the US.

Abood - my staff and I are investigating this and trying to resolve for you to get over here.

However, as of Wednesday, the issue still had not been resolved. Al Jumaili tweeted that he was at Dublin Airport with his Irish passport in hand, but the US Customs and Border Protection (CBP) said he could not proceed because he was “born in Iraq.”

I’m here with my #Irish passport in @DublinAirport, my flight is due now! The US @CBP said you can’t enter “because you were born in Iraq”. Absolutely sickening and literally insulting.

Ireland is currently part of the US Visa Waiver Program (VWP), meaning that Irish citizens can travel to the US for business or tourism for up to 90 days without a visa. However, citizens of countries that are included in the VWP but are also nationals of Iran, Iraq, North Korea, Sudan, or Syria are not eligible to travel or be admitted to the US.

Al Jumaili was born in Baghdad, Iraq, but came to Ireland in 2008 as a child. In Ireland, he fell in love with all things GAA, especially hurling. He took on the nickname Bonnar Ó Loingsigh in tribute to Clare hurling legend Colin Lynch.

In July 2020, Al Jumaili was on hand when the Muslim festival of Eid was hosted at Dublin's Croke Park, headquarters for the GAA, for the first time ever.

In a speech at the event, Al Jumaili said: "I'm originally from Iraq, Baghdad, and I can proudly say with my chest wide open that I'm Irish, too."

In February of this year, he was appointed as a Diversity & Inclusion Ambassador with AIG, the sponsor of Dublin GAA.

I am delighted to announce that I have been appointed as a Diversity & Inclusion Ambassador with AIG. Stronger Together on and off the #GAA field! look forward to working with my colleagues at AIG & Dublin GAA -now that’s lovely hurling! @AIGIreland @AIGinsurance @DubGAAOfficial pic.twitter.com/TEacNBF6CZ

Al Juamili, who now plays hurling with Ballinteer St. Johns in Dublin, went viral earlier this month when he shared a video of him hurling a sliotar off the walls of Stormont in Belfast.

At lunchtime, it was a sin not to go out and hurl! #Hurling against the walls of #Stormont. Now that’s lovely hurling! pic.twitter.com/R3A3O7FM0D