In this short 1920s newsreel, the American narrator hysterically describes the ancient Irish sport of hurling as a "sort of athletic manslaughter." 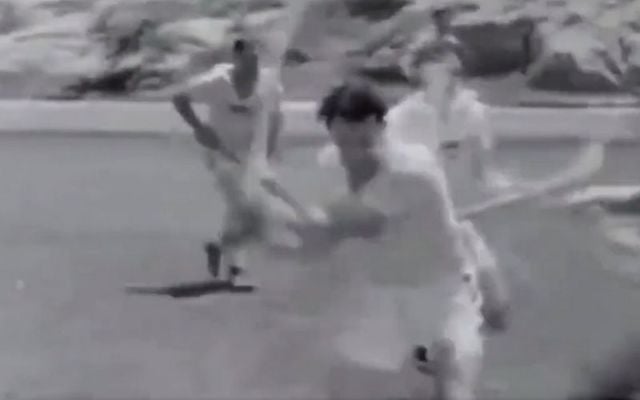 The ancient Irish sport of hurling is described by one American as a "sort of athletic manslaughter" in this hilarious video from the 1920s.

The short video, shared recently on Twitter by the "We, The Irish" podcast, features black and white newsreel footage of old games of hurling.

The American narrator describes the traditional Irish sport as a fast game of "skill and endurance".

"In case you haven't heard, hurling is an old Irish game, a sort of athletic manslaughter," the video's narrator says.

"The idea is to sock a ball with this pretty club, or bat, or shillelagh. Played for hundreds of years, it's a fast he man's game of skill and endurance and no fooling".

The commentator then tells two fighting players to "take it easy" after a "battle" breaks out around the net.

Hurling, according to 1920s America. pic.twitter.com/TEraF9Xi5U

Hurling, one of Ireland's native Gaelic games, is older than the recorded history of Ireland and is thought to predate the arrival of Christianity.

Some historians estimate that the game first emerged in 1200BC in Tara, County Meath.

The game was organized around written rules in 1884 following the founding of the Gaelic Athletic Association (GAA) in Thurles, County Tipperary.

Limerick are current All Ireland Hurling champions, while Kilkenny have won more All Ireland titles than any other county, with 36 Liam McCarthy Cups to their name.

Back in 2019, another American, comedian Josh Pray, went viral for his animated reaction to learning about hurling: