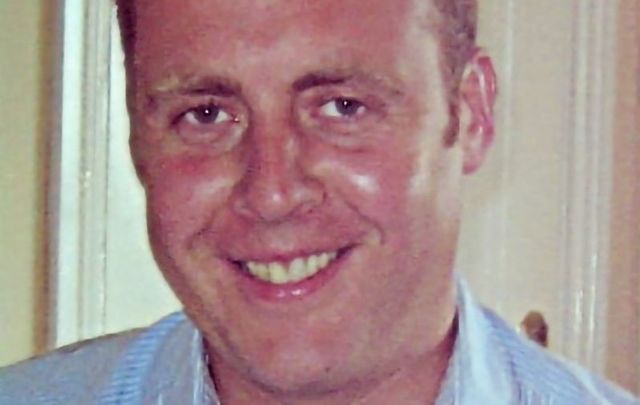 Garda Detective Adrian Donohoe, who was killed during a botched robbery at the Lordship Credit Union in Co Louth on January 25, 2013. RollingNews.ie

Aaron Brady, who was found guilty for the January 2013 capital murder of Irish Detective Adrian Donohoe, has been sentenced to life in prison.

Presiding Justice Michael White sentenced Aaron Brady, 29, to life imprisonment during his sentencing hearing on October 14 in Dublin. Brady faces a minimum prison term of 40 years according to the Criminal Justice Act 1990.

Justice White additionally sentenced Brady to 14 years for robbery, which will run concurrently with his life sentence.

In August, a jury delivered their 11-1 majority decision that Brady was guilty of the capital murder of 41-year-old detective Adrian Donohoe which occurred at the Lordship Credit Union in Dundalk, Co Louth on January 25, 2013. The jury previously found Brady guilty of involvement in the botched robbery that culminated in Donohoe's death.

Brady, of Crossmaglen in Co Armagh, denied the charges against him and maintains his innocence. He has reportedly instructed his defense team to appeal his sentence.

Speaking in Dublin's Central Criminal Court during the sentencing hearing on Wednesday, Donohoe’s widow Caroline said: “We had a loving, happy family, but in just 58 senseless seconds everything changed forever.”

She added: “Nothing and nobody will ever replace Adrian in our home.”

Donohoe's brother Alan read a prepared statement written by his parents in court which said in part: “It was such a waste of a good man by that evil, pointless act."

They added: “We visit his grave every week, which is some comfort, but it’s no place for him, he should be here with us living his life.”

Responding to the sentencing of Brady, An Garda Síochána (the national police service of the Republic of Ireland) said in a statement: “Detective Garda Donohoe went to work on the 25 January 2013, protecting the people of Louth. He never came home to his family after being shot and murdered during the course of a robbery at the community credit union in Lordship.

"The sentencing today has been another traumatic step in the investigation of this crime for Adrian Donohoe’s wife Caroline, children, extended family, friends, and his work colleagues at Dundalk Garda station and in the wider Garda organisation.

"Aaron Brady was just one member of a criminal gang on that day. This criminal investigation remains live as the other members of that gang remain to be brought before the courts; the commitment and tenacity of the investigation team based at Dundalk Garda Station to bring all suspects to justice remains steadfast.

Speaking today Garda Commissioner Drew Harris said: "My thoughts and those of the Garda Organisation are once again today with Adrian Donohoe’s family. We in An Garda Síochána will continue to support the family, and the friends and colleagues of Adrian.

“An Garda Siochana's resolve to bring all the participants in this crime to justice remains firm and the investigation team at Dundalk will continue to be supported by the resources of the wider organisation.”

An Garda Síochána appealed to any person with any information with respect to the murder of Detective Garda Adrian Donohoe to come forward to detectives with that information. The investigation team can be contacted at Dundalk Garda Station 042-9388400 the Garda Confidential Line 1800 666 111 or any Garda Station.