Aaron Brady is also facing capital murder charges for the 2013 death of Detective Garda Adrian Donohoe, which he denies. 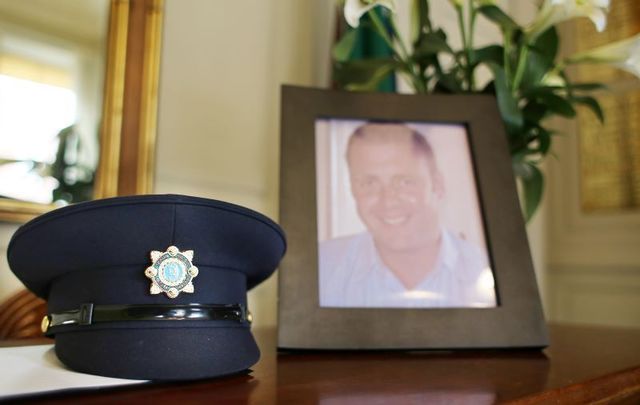 January 29, 2013: The book of condolences in Dublin's Mansion House for Detective Adrian Donohoe, who was shot dead during an armed robbery at Lordship Credit Union in Co. Louth on January 25. RollingNews.ie

Aaron Brady, 29, has been found guilty of involvement in a robbery that ended in the death of Detective Garda Adrian Donohoe in Co Louth in January 2013.

On August 10, a jury consisting of five men and seven women found Brady guilty of robbing some €7,000 in cash and checks taken from Lordship Credit Union in Bellurgan, Dundalk, Co Louth.

The jury had been told that four men jumped over a wall surrounding the credit union car park as employees prepared to leave with the day’s takings from several credit unions.

After nearly 13 hours of deliberations, the jury unanimously found Brady guilty of the robbery charges, which Brady had denied.

Brady, of Crossmaglen in Co Armagh, is additionally facing charges for the death of Detective Garda Adrian Donohoe, who was shot and killed during the 2013 robbery.

The jury will continue to deliberate his capital murder charge, which Brady also denies, on Tuesday from 9 am at the Central Criminal Court in Dublin. Presiding Justice Michael White had advised the jury to consider the robbery charges before the murder charges against Brady.

The jury can reach one of four verdicts: guilty of capital murder, murder, manslaughter, or acquittal.

Brady's defense team has raised manslaughter as a possible verdict on the grounds that the shooter on the night may have been attempting to fire a warning shot.

According to RTE, for Brady to be convicted of capital murder, the jury must be satisfied beyond a reasonable doubt that Brady was the shooter and that he knew he was shooting a garda who was acting in the course of his duty or was reckless as to whether he was a garda.

Justice White informed the jury that he will accept a majority verdict regarding the capital murder charge as opposed to a unanimous decision.