1 million Irish infected with Covid since start of pandemic

For the first time in 11 months, the number of Covid patients in hospital in Ireland this week topped 1,000. 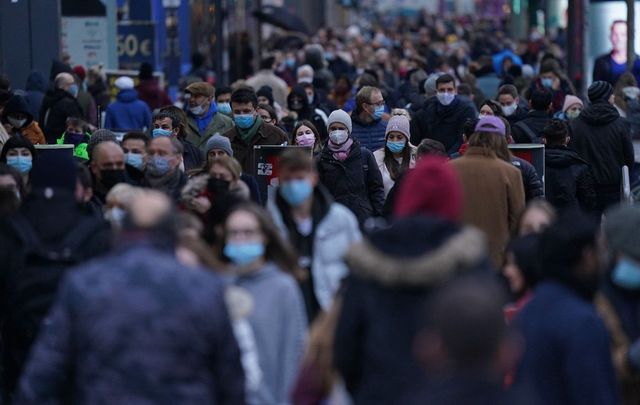 Mask up! A busy train station during a time of Covid. Getty

There were 1,063 patients in Irish hospitals on Monday morning – the first time more than 1,000 patients have been in hospital with Covid-19 since February 10, 2021.

The numbers in intensive care, however, remained well below the 100 figure, 89, compared with 173 cases in ICU on the same day 11 months ago.

A successful scheme of vaccinations, allied to the five times less virulent Omicron variant, are the main reasons for reduced intensive care figures although daily illnesses are now averaging more than 20,000, with most isolating at home.

The government is expected soon to receive advice from health chiefs to consider easing restrictions on close contacts as an aid to the economy.

Respiratory specialist Dr. Brian Kent, of St. James’s Hospital in Dublin, tweeted that despite reduced staff, Covid care in hospitals was much improved.

He tweeted, “Just finished first week on Covid unit since Omicron kicked in. Light-years removed from the battlefield medicine horror of last Jan/Feb. And away less awful than I’d expected, given the viral apocalypse case numbers.”

He added, “Still, way less scary than we might have feared, and feeling much more optimistic than 3-4 weeks ago.”

And way less awful than I’d expected given the viral apocalypse case numbers.

Taoiseach Micheál Martin said in Cork on Monday that while the Omicron wave will not peak for another week or two, he was confident further restrictions in Ireland will not be needed. Already pubs, restaurants, and theaters close at 8 p.m. each day until January 30.

“I fully respect that people will obviously explore the issues and research them and so on but, from my perspective, we have achieved one of the highest rates in the world through a voluntary system and that is the system we will maintain.”

Earlier, Health Services Executive boss Paul Reid said the percentage of people testing positive for Covid-19 who are presenting to hospitals with symptoms is “significantly down” on previous waves, but the volume of people in hospital with Covid-19 is still impacting on services.

Up to 15,000 healthcare staff are out with Covid-19 either through having the disease themselves or as close contacts.

Reid told RTÉ Radio, “What has really hit is the pace of which this has happened. Some hospitals have gone from 60 staff out to 350 staff out in a short space of time.”

Annual leave for healthcare staff has been deferred in some cases.