Joseph Quinlan died from the coronavirus in a Dublin nursing home after a brave fight. He will be long remembered. 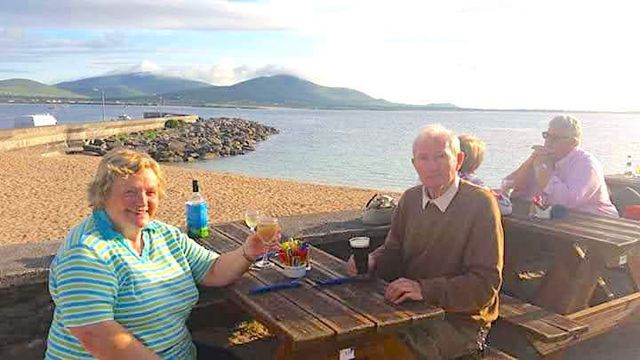 COVID came for my brother-in-law yesterday, Joseph Quinlan, a big strapping Tipperary man of farming stock who was married to my sister, Triona, for 46 happy years.

He fought it bravely for two weeks astounding the medical staff who had predicted a much earlier passing. But Joe was as tough as the mountains of West Kerry he often climbed.

Finally, the disease took over but his spirit kept him alive long after he should have died.

He was as passionate about Tipperary hurling as any man who ever donned the blue and gold jersey.

From about January of any given year, he’d be assessing that hurling championship with an eagle eye. His interest was first driven by the great Tipperary teams of old, especially those in the 1950s and 60s he watched as a boy.

At home in Castleknock, in Dublin, Joseph would often take out tapes and later DVDs of Tipperary matches stretching back to the 1950s. I wonder what the neighbors thought in the dead of winter hearing the replay of some long-ago All Ireland matches with the famous voice of Michael O’Hehir and later Michael O'Muircheartaigh echoing through the house.

We went to the All Ireland hurling final in 1999, between Tipperary and Clare. When Tipp got a last-minute close-in chance and a goal that would win them the match I thought he’d die of excitement. Joe was on his feet shouting “back of the net” but the Clare goalie made a great save and Tipp were beaten.

Joe took it on the chin, in the car on the way home he was already discussing revenge in the following year’s championship. He talked about a slew of younger players coming through and the light of battle for his beloved Tipperary was already aflame.

He was an incredibly fit man himself, who thought nothing of a five-mile walk every day. When we stayed in his holiday home, seven miles west of Dingle, in Kerry, he sometimes walked in the full seven and back again later in the day.

A walk with him was an education in nature, he knew the species of every plant, the name of every tree, every type of wildflowers we walked past. He was a man happiest in the outdoors, the more remote the better.

He climbed all the local mountains like a mountain goat. On one occasion after a particularly tough climb, he realized he had left his glasses at the summit. Before anyone could stop him he was off back up the mountain to retrieve them.

At 83 he was still climbing ladders, painting the upper windows of the house.

As for politics,  he was old school nationalist, a united Ireland man to the core. He read Irish history with a ferocity and focus and could name chapter and verse of every conflict from the War of Independence down.

He was never a drinker but would drive 50 miles for a sing-song pub with all the old favorites played. When asked to sing he was not shy. It was usually ‘Slievenamon” the Tipperary anthem but he sang out many a ballad from his vast repertoire.

He came to New York for my wedding in 1996. He loved Manhattan despite the strange looks he got in a Mcdonald's when he ordered a breast of chicken and chips and the fright of one taxi driver when Joe hopped in beside him instead of sitting in the back.

He remained in every sense a gentleman, especially good with rhymes and stories for young kids. His was a giving heart to the very end, as he entertained those in the nursing home where he spent his final year.

My sister, Triona, watched over him like a hawk, they were best friends as well as a married couple. Where you found one, you found the other. During his final year the cruelty of COVID kicked in and she went for long stretches unable to see him. The second cruelty of it all was he was due for the vaccine injection the day he was diagnosed.

Triona did get to his bedside during his final days dressed in PPE from head to toe and held the hand of her beloved husband for the last time. He passed away knowing the love he inspired and always will. I suspect his last words were “Up Tipp”.

He is just one story from the millions worldwide who died of this infernal plague.

But knowing Joe he may well be having the last laugh. I know for a fact that somewhere up there Joseph is roping in a few saints to listen with him to the 1971 All Ireland final when Tipp slew the old enemy Kilkenny.