In this issue, we look at the origins of St. Patrick's Day, go off the beaten track in County Carlow, share our reader's vacations in Ireland, and much more! 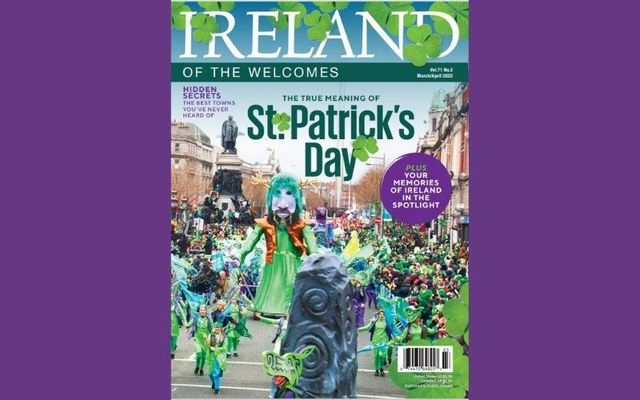 The March / April issue of Ireland of the Welcomes is out now- get a taste of what's inside and how you can your hands on next month's edition.

It feels like we've finally turned a corner and after a very strange two
years, St. Patrick's Day is being celebrated in style at home and abroad.

Hailing Ireland's patron saint and celebrating IOW's 70th anniversary, we take a look at a 1954 article on the lesser-known Shrine of St. Patrick's Tooth. We look at the origins of Paddy's Day and how it has changed through the centuries.

Click here to subscribe to Ireland of the Welcomes print magazine -  the largest and longest-running Irish interest magazine in the world!

Elsewhere, Deanna O'Connor embraces the ancient in an examination of fairy trees, while Leon O’Cathasaigh takes a deep dive into the legend of Deirdre of the Sorrow, while Stephen Roberts marks the 175th birthday of Dubliner and Dracula author, Bram Stoker. Domhnall O'Donoghue explores the ancient and modern wonders of Carlow, The Dolmen County, and also the Kingdom's rose, Tralee.

In this issue, we share our reader's own vacations in Ireland with a spread of their stories and photos, they were so kind to share with us. We're delighted to have you along for the ride and to celebrate our 70th birthday!

Let's check out what's inside the March / April issue of Ireland of the Welcomes- as always, enjoy!

A roundup of the what's on and where, and the latest art and culture news on the island of Ireland.

An extract from "Enjoying Claret in Georgian Ireland: A history of amiable excess" by Patricia McCarthy looks at Ireland's love affair with the claret.

Venture past the obvious towns and cities across Ireland and discover some hidden gems.

- Off the Beaten Track

County Carlow is a haven for lovers of nature, heritage and beauty, writes Domhnall O’Donoghue.

The tale of Count Dracula and the man who created him on his 175th birthday.

- Deirdre of the Sorrows

Leon Ó Cathasaigh looks at the legendary Deirdre of the Sorrows and how it describes so much more than a tale of failed love.

We return to Galway's only five-star hotel, the Philip Treacy designed g Hotel.

- The Battle of Ventry

Modern superhero stories have nothing on the epic Battle of Ventry, when the Fianna faced down invading forces from all corners of the earth, writes Deanna O’Connor.

- A Rose By Any Other Name

Steeped in culture and heritage, Tralee is more than just the gateway to the Ring of Kerry - a lot more, writes Domhnall O’Donoghue.

- What is it about

What you need to know about the Tara Brooch, a Celtic treasure discovered in County Meath in the 1850s.