Childhood sweethearts living in Canada refused to let bride's injuries get in the way of their big day, surrounded by family. 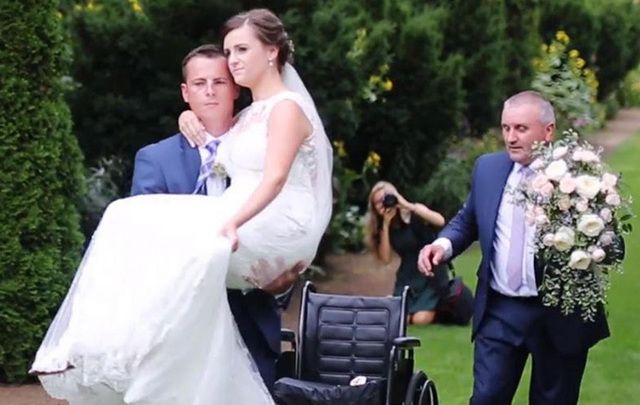 Stuart Patterson, carrying his bride, Hannah up the aisle just weeks after she broke her pelvis in a car crash. Emily Harris / Vimeo

A video of a Tyrone couple has gone viral after images of the groom carrying the bride down the aisle, taken in August in Ontario, were released.

Just weeks before the wedding Hannah (23), from Sixmilecross, Co Tyrone was in a car accident which caused devastating injuries, leaving her wheelchair bound. One the big day Hannah’s father pushed her chair half-way down the aisle and then her groom, Stuart (25), from Fivemiletown (also in Tyrone), scooped her up and carried her the rest of the way to the altar.

Hannah Patterson was in a car crash in July and broke her pelvis leaving her in a wheelchair. She told the Belfast Telegraph she was determined not to let the accident ruin her big day when she was to marry her childhood sweetheart.

The video, posted to Vimeo by videographer Emily Harris, shows Hannah getting ready for her big day and then being wheeled up the aisle by her father before her groom gently picks her up.

She said afterwards, “I was obviously very nervous and I'm guessing he was too. When Stuart came to get me, he said, 'You look stunning pet.'

"I was telling him how nervous I was and warned him not to rip my dress!"

Hannah told the Belfast Telegraph she’s “doing better, having a slow recovery, but it’s going in the right direction.”

Brave Hannah (nee Kyle), a former Omagh Academy student, and Stuart met in Sunday School when they were just 15 and 17 years of age. Hannah was determined that nothing would get in the way of her big day.

After the accident she said “I was very upset and thought my day was going to be ruined.

"I suffered a lot of injuries and was in a lot of pain, but moving the wedding never crossed my mind.

"Our families were flying over for the wedding from Northern Ireland.

"Having the wedding gave me something to fight for."

Read more: Check out the dance floor at a “Lord of the Dance” wedding

The couple made the decision to start their new lives together after Stuart and his family bought a farm in the region five years ago.

"I went to university and then moved over two years ago to be with Stuart. We did long distance for years," Hannah said.

"I miss my family a lot, and we both miss Northern Ireland. We travel home often and each time is very special."

Photographer Sarah Grace, from Toronto, who captured the day in film posted the photo (above) on Facebook:

The stuff of fairy tales!

If you have any videos you'd like to share with the readers of IrishCentral send them along to editors@irishcentral.com.