Trump's new Chief of Staff General John Kelly is one of the few senior generals to have lost a family member serving in Afghanistan. 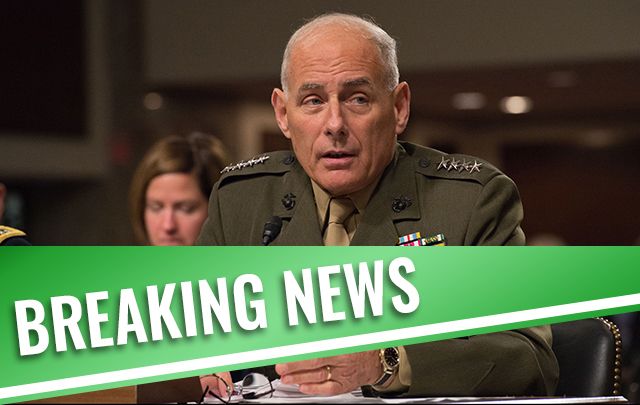 General John Kelly is the new White House chief of staff, making him the most powerful Irish American since Ronald Reagan sat behind the Resolute Desk over 30 years ago. Reince Priebus exited the position today after six months in the job.

Born in 1950, Kelly joined the Marines in 1970, something Defence Secretary Ashton Carter described as “the only way to serve for any self-respecting Irish Catholic from Boston.”

But if the military gave him a fantastic career and the honor of serving his country, it has also caused him tremendous heartbreak: in 2010 his son was killed in Afghanistan.

Three weeks later he gave a speech in Massachusetts at an event honoring the state’s fallen soldiers since 2001 and their gold star families.

Even though he did not mention his son or his own grief once, onlookers described it as an immensely powerful speech that touched the hearts of the grief stricken families around him.

“He was probably torn up inside,” said Chris Lessard, the man who invited him to speak.

“That was my first impression of General John Kelly. Could you find a classier person? He’s a great man.”

I am pleased to inform you that I have just named General/Secretary John F Kelly as White House Chief of Staff. He is a Great American....

...and a Great Leader. John has also done a spectacular job at Homeland Security. He has been a true star of my Administration

I would like to thank Reince Priebus for his service and dedication to his country. We accomplished a lot together and I am proud of him!

With 40 years of military experience, his confirmation by the US Senate to the position of Secretary of Homeland Security was described as a “lovefest” - 11 Senators voted against him and 88 in his favor.

What made him stand out from the crowd to President Trump was his hawkish views on the border and experience in charge of the US Southern Command - a position that brought him into daily contact with the problems of policing America’s border with Mexico.

Trump has long spoken of his admiration for generals and has packed his Administration with military leaders but insiders wondered whether Homeland Security would be something of a culture shock for a former soldier used to working above the partisan fray.

“It’s very much a political job. It’s not a chain-of-command job,” Juliette Kayyem, a former assistant secretary for Homeland Security, told the Boston Globe. “He’s going to have to learn that.”

Kelly said he would keep an open mind about DREAMERS but gained praise from Trump supporters with his pledge to speed up deportations.

“I believe that rapidly processing and returning aliens to their countries of origin in significant numbers will help to immediately and significantly reduce the number of individuals and groups trying to enter the country illegally,” he said in January. “It will not be worth the investment of their life savings to get here, and it will not be worth making the dangerous trip north, if they know they will quickly be put on a bus or aircraft and returned south.”

He made good his promise and the number of arrests of non-criminal illegal immigrants have doubled under his watch.

Now he has what one of his predecessors described as “the worst job in Washington”. With no experience in Congress, he must help a President with no legislative wins implement his domestic agenda and keep America safe in a still dangerous world.

His predecessor Reince Priebus lasted a mere six month in the job - one of the shortest tenures in US history - this is not a union guaranteed job; the Chief of Staff serves at the pleasure of the President and as this one has a propensity to fire and hire people quickly there is nothing to say he could be unemployed by Christmas.