On Tuesday, the PM lost his first House of Commons vote as Labour and rebel Tories seek to avoid a no-deal Brexit on October 31. 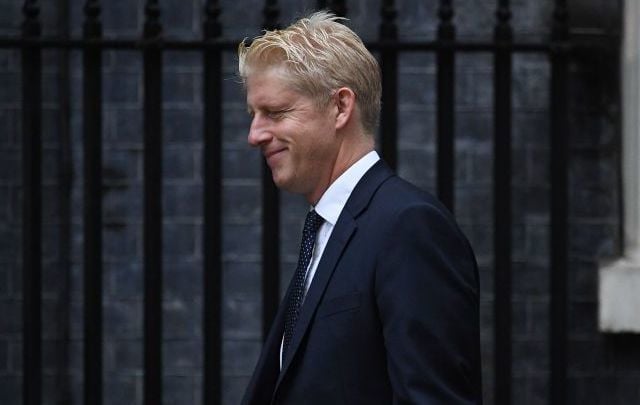 Jo Johnson is to step down. Getty

The new British Prime Minister Boris Johnson was knocked back in his attempt to call a snap election after Labour and rebel MPs once again voted to prevent a no-deal Brexit.

September 5: Jo Johnson, MP and brother of Prime Minister Boris Johnson, has announced he will step down. It is yet unclear if he is stepping down today or at the next general election.

In a tweet, he revealed he has spent time "torn between family loyalty and the national interest."

It’s been an honour to represent Orpington for 9 years & to serve as a minister under three PMs. In recent weeks I’ve been torn between family loyalty and the national interest - it’s an unresolvable tension & time for others to take on my roles as MP & Minister. #overandout

The other Johnson brother is much more pro-EU than the Prime Minister, having voted Remain in the 2016 referendum.

September 4, 4.45 pm (EST): The British government has been defeated again on a motion calling for a snap general election.

As expected, the House of Commons rejected the motion with many abstaining from the vote, causing Johnson to fail in securing the two-thirds support he needed.

3.30 pm (EST): British Prime Minister Boris Johnson has called for support for a snap general election to take place on October 15, just days before the current Brexit deadline on October 31.

The move came after Johnson and the Conservative Party failed to block a bill that will prevent a no-deal Brexit if the Prime Minister does not reach an agreement with the European Union by the current deadline.

The Prime Minister claimed the bill would force him to  "surrender" to the EU adding: "I refuse to do this and it is clear there is only one way forward for the country.

"In my view, and in the view of this government, there must now be an election on Tuesday 15 October."

Johnson will need two-thirds of MPs to support a poll but Labour, the SNP and the Liberal Democrats already stated they will not vote in favor.

Labour leader Jeremy Corbyn claimed Johnson's offer was "a bit like an offer of an apple to Snow White from the Wicked Queen... offering the poison of a no-deal.

"Let this bill [to block a no deal] pass and gain Royal Assent, then we will back an election so we do not crash out," Corbyn argued.

You can watch the ongoing debate here:

1.00 pm (EST): US President Donald Trump has told the US press that British Prime Minister Boris Johnson "knows how to win" despite Johnson just moments before facing yet another setback in his drive for Brexit on October 31.

"He’s a friend of mine, and he’s going at it, there’s no question about it ... Boris knows how to win. Don’t worry about him," the President said.

This afternoon, British Members of Parliament (MPs) were given the second chance to vote on a bill that would prevent a no-deal Brexit from occurring and would allow for a push for an extension on the deadline if no agreement had been reached.

The Tory rebellion is growing: Govt defeated on 2nd reading of Benn bill to delay Brexit by one more than last night; 329-300. Caroline Spelman is the new rebel.

They voted by 329 votes to 300 in favor of the bill – a majority of 29 - signaling a second blow for Johnson, who remains adamant he will not seek an extension, with or without a deal.

MPs are currently discussing amendments to the Bill.

9.00 am (EST): British Prime Minister Boris Johnson is set to seek an early general election on Wednesday if Labour and rebel Conservative Party members (Tories) succeed in passing a bill that will block a no-deal Brexit on the October 31 deadline.

On Tuesday, Johnson lost his first vote in the House of Commons (the lower house) as members of his own party crossed the line and voted with Labour to pass a bill forcing him to seek an extension if no deal is reached by October 19. Johnson claims he will refuse to seek a further extension to the deadline with Britain initially set to leave the EU last March.

He will need two-thirds of Members of Parliament (MPs) to trigger an election, support he is not expected to receive. On Wednesday, the new PM lost his majority in the Commons as MP Phillip Lee defected to the Liberal Democrats.

Later in the evening, 21 Tories, including the grandson of Winston Churchill, also lost the whip, effectively expelling them from the Conservative party, for voting with Labour on the extension bill.

The showdown between the government and the opponents of a no-deal Brexit will continue later today as the PM faces his first session of Prime Minister'ss questions after losing his Commons majority.

What are your thoughts on the current Brexit actions from Boris Johnson? Let us know in the comments section, below.