The Cork City monument's design will be based on a famous photograph of Michael Collins with his push-bike. 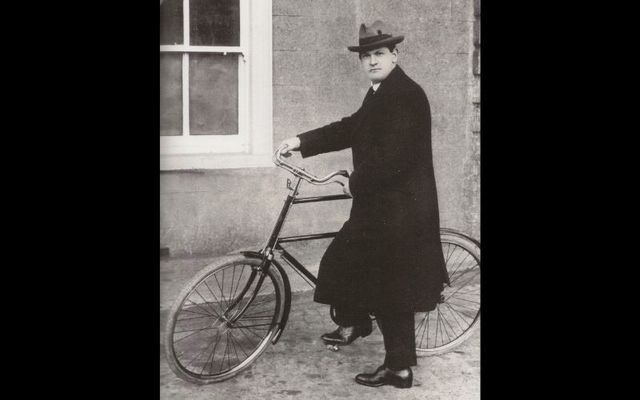 Cork City Council has agreed to commission a new statue of Michael Collins with his bicycle to be erected in the city center. The design is based on a well-known photograph of the Irish revolutionary hero.

The monument's design will be based on a famous photograph of 'The Big Fellow' standing with the bicycle he used to get around Dublin city center while he was leading the military resistance to British rule in Ireland.

The specially commissioned monument has been approved by Cork City Council during the centenary year of Collins' death. He was killed at Béal na Bláth on August 22, 1922, at the age of 31.

According to CorkBeo, the location of the new Michael Collins statue has not yet been decided, although prominent sites like Daunt's Square, the Grand Parade, or the redeveloped plaza outside the Opera House are likely in the running.

There is already one full statue and one major bust of Collins in Cork. In 2002, the first-ever full-figure statue of the West Cork hero was unveiled in Clonakilty after a locally funded campaign led by organizers of the Michael Collins Centre. A large bust of Collins in Fitzgerald's Park was created by Seamus Murphy and donated by Dr. Con Murphy to the people of Cork.

Cork City Councillor Shane O'Callaghan is one of the organizers leading the proposal for the new Michael Collins statue.

The Fine Gael Councillor said: "I am delighted that my motion calling on Cork City Council to facilitate the erection of a statue of Michael Collins in Cork City Center was passed by 22 votes to 1.

"The motion received cross-party support and is for a statue of Collins with his bicycle based on the iconic photo."

I am delighted that my motion calling on @corkcitycouncil to facilitate the erection of a statue of Michael Collins in Cork City Centre was passed by 22 votes to 1. The motion received cross party support and is for a statue of Collins with his bicycle based on the iconic photo pic.twitter.com/qGq6l8yWQZ

The lone dissenting vote came from Solidarity Councillor Fiona Ryan. While she respected the views of those involved in the statue's proposal, she said “Michael Collins can not be divorced from ultimate repercussions of the pro-Treaty side."

The Irish Examiner reports that the statue could be in place by this time next year.