Scythian is resurrecting their "quaranstream" live stream series tonight, Friday, March 4 to help you get ready for St. Patrick's Day! 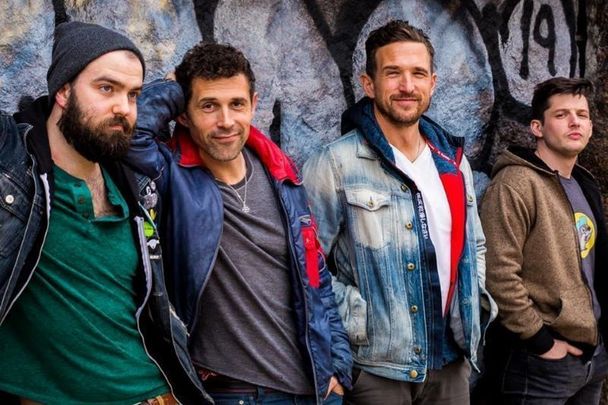 Scythian is bringing back their "quaranstream" live stream this Friday, March 4 to get ready for St. Patrick's Day! Scythian

IrishCentral is delighted to again be teaming up with Scythian to bring you this special, free show right here on IrishCentral and over on our IrishCentral Facebook page.

Ahead of Friday’s shindig, the group said: “Have you ever had a dream that you were falling through a pit of despair? You know, falling to your infinite, unknown demise ONLY TO BE SNATCHED from your descent by 4 very ... umm, interesting fellows who so happen to play music and fully entertained you for the rest of your JOYUS existence?

“WELL ITS A REALITY because on March 4th, Scythian (us) will be putting on our St. "Practice" Day Quaranstream! We say "Practice" because we know you haven't had a decent St. Patrick's day since 2019, and you need ALL the practice you can get.

“But never fear, as we said in your really overly dramatic dream, WE'RE HERE TO HELP, and to paraphrase a quote from the great philosopher, Woody from Toy Story, "We're professionals, we're the best!"

“So buy up all the Guinness, Five Farms, Slane, BUA, Corned Beef, Cabbage, Shepard's Pie, Irish themed anything, and tune in at 8:00 PM EST here on Facebook or Youtube to have the lesson of a lifetime!”

Scythian appeals for support for Ukraine

As Scythian prepares to go live this Friday, the group is also appealing for support for Ukraine. Frontman Dan Fedoryka said on Facebook: ”For those of you who may not know, my parents immigrated from Ukraine as children and we have friends and cousins over there.

“Many have been asking how they can help and so we wanted to share this link to the Knights of Columbus aid campaign that is matching dollar for dollar up to $500,000 and promises that 100% of the aid will make it to the Ukrainian people.

“Though prayer may seem so weak in the face of tanks and bombs, our family learned first hand the power of God's protection as they escaped the Communists many years ago.

“We pray in hope that God may protect our friends and family and ask you to join us!"

Scythian has shared a version of the Ukrainian Classic "Dearest Mother of Mine" performed by Alex's wife Catie during a live stream last summer.

Our heart goes out to the suffering Ukrainian people. Ukrainian is Dan and Alex's first language and here is a version of the Ukrainian Classic "Dearest Mother of Mine" performed by Alex's wife Catie this past summer during a Live Stream. You can donate to this Knights of Columbus fund which matches dollar for dollar up to $500,000. 100% of funds go to aid the people of Ukraine. https://www.kofc.org/secure/en/donate/ukraine.html?utm_source=A360&utm_medium=SK%20Message&utm_campaign=Ukraine%20Fund

Washington DC-based Scythian (sith-ee-yin) began over 12 years ago as a bunch of college buddies playing Celtic music in the streets and has grown to be a headliner on the US Celtic Festival Circuit as well as a name in the Bluegrass/Americana Festival Circuit.

They found that their brand of high-energy folk music found a resonance that led The Washington Post to state: “Scythian’s enthusiasm is contagious, and shows seem to end with everyone dancing, jumping around or hoisting glasses.”

For over 12 years, they have found success as an independent band and have played over 1,300 shows all over the united states, Europe, Canada, and as far away as Australia.

Founded by brothers Alexander and Danylo Fedoryka who are first-generation sons of Ukrainian immigrants, Scythian from the start has been a search and love for the "old time, good time music" of many cultures. They were inspired by a tale told by their 92-year-old grandmother of a roving fiddler who came into her farming village every six months or so. Once he was spotted, messengers were sent to all the outlying fields and mills and worked ceased; everyone gathered in the barn where they danced all night and danced their cares away. This spirit is what has motivated Scythian from its inception and their success as an independent band is due largely to their finding a resonance of soul amongst kindred spirits that span all ages and races. This spirit took them from the streets to playing for the US president on St. Patrick's Day and it's the enthusiastic response they receive that has made each of their 1,300+ shows unique.