Niall O’Dowd will speak about the Irish contribution to the American Revolution during the Washington Association of New Jersey's annual meeting and luncheon on February 21. 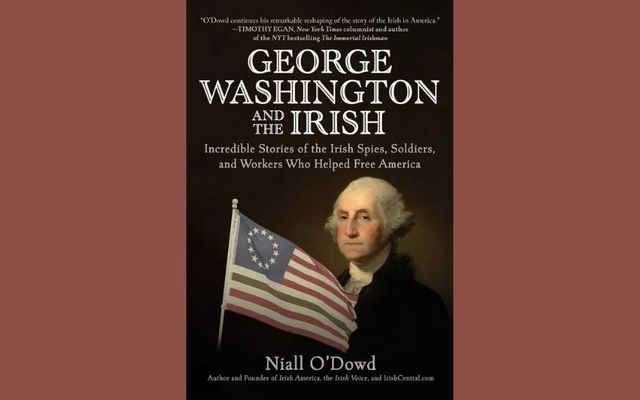 "George Washington and the Irish - Incredible Stories of the Irish Spies, Soldiers, and Workers Who Helped Free America" by Niall O'Dowd. Simon & Schuster

Niall O’Dowd, the founder of IrishCentral, will address the Washington Association of New Jersey during its annual meeting and luncheon on Presidents’ Day, February 21, in Morristown, New Jersey.

The event, which is open to the public, will take place at The Madison Hotel in Morris Township, New Jersey at 11:30 am on February 21, George Washington's birthday. Tickets, which include a meal choice, can be purchased online here.

The Washington Association of New Jersey says that each year since 1887, a distinguished scholar or political leader has presented an Annual Address, including Woodrow Wilson, Douglas Southall Freeman, and most recently, Governor Thomas Kean.

O’Dowd will be speaking ahead of the publication of his latest book “George Washington and the Irish: Incredible Stories of the Irish Spies, Soldiers, and Workers Who Helped Free America.” The book will be available for purchase at the event.

New York Times columnist Timothy Egan said in an advance review of the new book: “From the margins of American history to the makers of American history, Niall O’Dowd once again finds a gallery of largely lost sons and daughters of Erin who deserve their place in the founding story of a nation.

“Who knew that a painter from a debtor’s prison in Dublin gave us the image of Washington on the dollar bill, or that a peasant’s son from County Wexford was the founder of the American Navy?

“With this book, O’Dowd continues his remarkable reshaping of the story of the Irish in America.”

A native of Tipperary and a graduate of University College Dublin, O'Dowd emigrated to the US in 1979. He started his first newspaper in San Francisco in 1980 and is the Founder and Editor of Irish Voice Newspaper, Irish America Magazine, and IrishCentral.com, the largest Irish me­dia site outside Ireland with 3 million monthly users.

O’Dowd played a major role in the Irish Peace Process acting on behalf of the Clin­ton White House as chief negotiator with Sinn Féin and the IRA. His role was the subject of a book ‘Daring Diplomacy’ which was also covered as a PBS documentary and a Washington Post Magazine article.

O'Dowd has received an honorary degree from University College Dublin for his work as well as Ireland’s Presidential Distinguished Services Award. He has written five books, ‘An Irish Voice’, ‘Fire in the Morning,‘ 'Lincoln and the Irish the Untold Story,' and ‘A New Ireland.' Based on the major success with his 'Lincoln and the Irish' book, he began researching George Washington and the Irish.

To learn more about this event, visit the Washington Association of New Jersey's website.