Mick Flannery and SON (aka Susan O'Neill) are featured in the next installment of the 'Courage' live stream concert series presented by Other Voices in Ireland on Tuesday, July 21 - tune in here! 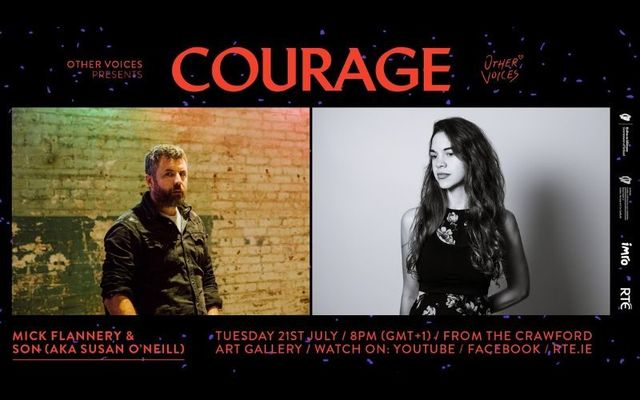 Mick Flannery and SON (aka Susan O'Neill) perform live from Cork City on July 21 - tune in here! Other Voices

Mick Flannery, veteran alternative folk musician, will be joined by Irish singer-songwriter SON (aka Susan O'Neill) on Tuesday, July 21 for a live performance from the Crawford Art Gallery in Cork City.

The performance, the next installment of the 'Courage' series presented by Other Voices, will be live-streamed here on IrishCentral as well as over on our Facebook page on Tuesday, July 21 at 8 pm IST / 3 pm EST.

An award-winning, double-platinum selling Irish artist, Mick Flannery’s latest self-titled album debuted at number one in July 2019. He was recently shortlisted for the RTE Choice Music Prize for Irish Album of the Year 2019 and premiered his musical “Evening Train” (based on his album of the same title) in June 2019 at Everyman Theatre in Cork, Ireland.

While County Cork singer-songwriter Mick Flannery is outwardly reserved his songs are fluent in expressing layered aspects of the human condition, its flaws, triumphs, and general uncertainty. He began to write songs as a teenager in his home of Blarney, County Cork. As musical influences from albums by the likes of Bob Dylan, Van Morrison, Joni Mitchell, and Tom Waits seeped into his creative DNA, Mick absorbed, learned and honed the craft that would send him on his way into the world. Flannery is currently working on a duet album with fellow Irish artist and newcomer Susan O'Neill, to be released in 2021.

A critically acclaimed performer, and a member of King Kong Company, SON - aka Susan O’Neill – is one of Ireland’s brightest emerging talents. Her first album ‘Found Myself Lost’ was one of Hot Press magazine’s ‘Albums of the Year’ and garnered her a number of opportunities, including joining Sharon Shannon on her sold-out tour of Australia and New Zealand. SON has recently been collaborating with multi-platinum, award-winning artist, Mick Flannery, whom she recently released a duet, “Baby Talk,” to rave reviews. In promotion of the song, SON and Flannery have made several late-night talk-show appearances as well as having announced joint tour dates.