McLean Avenue Band will be performed live from New York on Thursday, July 9 - watch back on the show here! 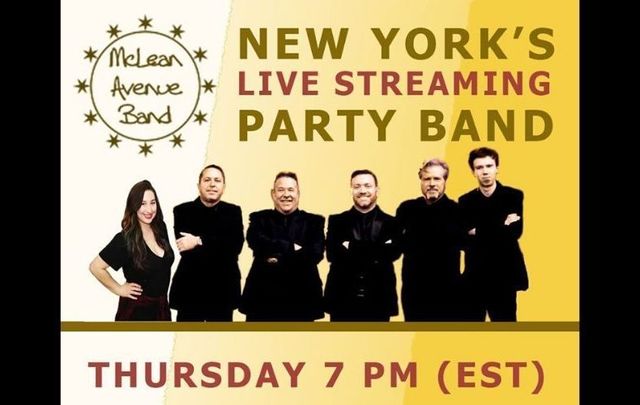 McLean Avenue Band reunited for the first time since quarantine took hold for a craic-filled session!

Irish musician Padraig Allen returned for another IrishCentral Happy Hour livestream session on July 9, and he brought his McLean Avenue Bandmates along for the party!

The McLean Avenue Band - Full Party Band live stream show was hosted right here on IrishCentral and over on our Facebook page on Thursday, July 9 at 7 pm EST.

McLean Avenue Band - Full party band Live Stream on Thursday 7 PM on our Facebook Page. Playing all your favorite party songs. Join us for a fun filled night and check out how we can create the perfect online party for you, your company or fundraising organization. #virtualentertainment #virtualband #onlinefundraising #partyband #virtualliveband #zoomparty #streamedentertainmnet #streamingband #virtualparty

Allen, a native of Co Westmeath who now lives in New York, has been keeping his fanbase entertained throughout the coronavirus pandemic with his New York Irish Live virtual concerts, many of which have been featured right here on IrishCentral.

For Thursday’s show, Allen will be joined by Jake James, Joe Biancorosso, Matt Fisher, Lacey Angerosa, Greg Guber, and Eamon Ellams for the show that will be live streamed for Cahall Moore’s PA virtual studio in Queens, New York.

Allen says that the show will be a fun-filled night with the band playing all your favorite party songs, and viewers can learn about how the McLean Avenue Band can create online parties for you, your company, or fundraiser.

McLean Avenue Band is an Irish American band based in Hudson Valley and Westchester County, New York. They have taken the Irish American music and entertainment scene by storm with their wonderful arrangements of pop, rock, and folk songs, intertwined with Traditional Irish tunes and upbeat melodies, played on fiddles, banjos, bodhrans (Irish Drum) button accordions and acoustic guitars. These song arrangements are ideal for celebration events like weddings and parties, as well as festivals and concerts.

The band formed over ten years ago when talented Irish musicians met up for regular weeknight get-togethers (aka “sessions”) in, yes, a bar in the McLean Avenue neighborhood on the Bronx / Yonkers border of New York City, an Irish enclave.

Tune in to the McLean Avenue Band live stream party this Thursday, July 9 at 7 pm EST!