Watch back on the Other Voice live stream concert from Irish singer-songwriter Lisa Hannigan here. 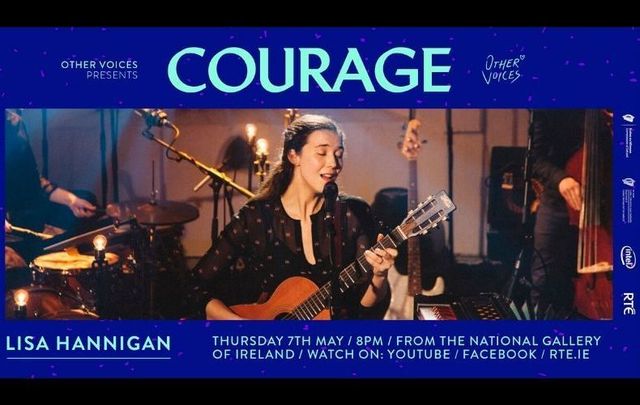 Tune in for a live performance from Irish singer-songwriter Lisa Hannigan today, May 7. Other Voices

Irish musician Lisa Hannigan performed ive from The National Gallery of Ireland on Thursday, May 7 as part of the #Courage live concert series from Other Voices.

A portion of the live stream is available here on IrishCentral and our Facebook page as part of our ongoing IrishCentral Happy Hour series.

Lisa Hannigan is an acclaimed singer/songwriter, multi-instrumentalist, and occasional voice actor. She released her debut album Sea Sew in 2008. A joyous kaleidoscope of love songs, laments, sea shanties and glockenspiels, with a cover hand-stitched by Lisa herself, the self-released album was a runaway success, nominated for a Choice award in Ireland and a Mercury Music Prize in the UK.

The ecstatic reception gave her the confidence to explore deeper, darker emotions. Passenger, which came out in 2011, cantered around the pain of leaving and the sense of apartness consequent to a life spent in constant motion.

In 2015, she made her film debut as a Selkie (mermaid) – in the Oscar-nominated Irish animation Song of the Sea. She has also voiced the character Blue Diamond in the popular American animated television series Steven Universe. As well as acting she has also contributed a haunting cover of 'Danny Boy' to the TV series Fargo, as well as vocals for Steve Price's scores for Gravity (which won an Oscar) and Fury.

In 2016, she released her third album, the evocative and more pop-oriented At Swim, which was produced by the National's Aaron Dessner. In 2019 Hannigan released her first concert album, Live in Dublin, which was recorded at the National Concert Hall with the contemporary classical orchestra s t a r g a z e.

‘Courage’ is a new project that delivers uplifting, inspiring performances from brilliant artists to the public during the COVID-19 crisis. Courage will beam these performances directly into homes across the nation, from a number of iconic cultural locations.

Courage has been curated by the team that produce Other Voices and is funded by the Department of Culture, Heritage and the Gaeltacht, and by Intel.

To date, ‘Courage’ live streams have featured performances from Ye Vagabonds, Sorcha Richardson, Caoimhín Ó’Raghallaigh, Rhiannon Giddens, and Francesco Turrisi. The project has gone from strength to strength, with over 200,000 tuning in worldwide to date.

Organizers say: "Our goal is to provide essential cultural output during this period. Music collapses distance in this time of isolation, it gives us courage, consolation and brings us together. Performances will take place on Tuesday and Thursday nights and will be made available worldwide, free of charge, thanks to the support of the Department of Culture, Heritage and the Gaeltacht, Intel and RTÉ. Courage will also be shown on RTÉ2 from the 7th of May every Thursday at 23:30."

Speaking of the project Minister Madigan said: “We know culture plays a hugely positive role in our collective wellbeing. The performances that will take place during the Courage programme are sure to raise plenty of spirits and can be enjoyed as people stay at home. It is in addition to the support that the Government is already providing to artists and those working in the arts and cultural sectors.”