Kodaline will be performing live from Swords Castle on Thursday, July 2 as part of the Courage series from Other Voices - tune in here! 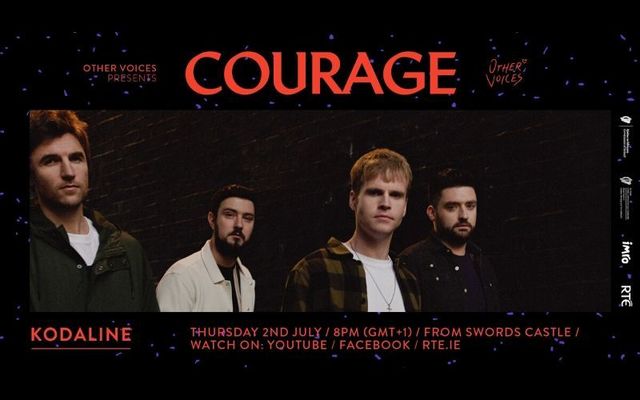 Kodaline performs live on Thursday, July 2 as part of the 'Courage' series from Other Voices - tune in here! Other Voices

Kodaline is featured in the next episode of ‘Courage’ from Other Voices on Thursday, July 2.

Kodaline, the beloved modern rock band from Ireland, will be playing a live set from Swords Castle in Dublin on Thursday, July 2 and you can tune in to the show right here on IrishCentral.

The performance, part of the ‘Courage’ live stream series from Other Voices, will begin at 8 pm IST / 3 pm EST and will be streamed here on IrishCentral as well as over on our Facebook page:

Last November, a jet-lagged Kodaline were driving into Pune, India, when a motorcyclist frantically flagged at them to pull over. Baffled by his urgency, they stopped at the side of a busy road. The reason? The man was a hardcore Kodaline fan and wanted to get a selfie with frontman Steve Garrigan.“We made his day or even his year,” laughs Garrigan.

Such scenes were replicated throughout their first tour of Asia. In India, they headlined the NH7 Weekender in front of 22,000 people. Their first show in South Korea sold-out within a minute.

Back home in Dublin, they sold-out two 15,000 capacity shows at St. Anne’s Park before playing to another 60,000 at Electric Picnic. All of which would’ve seemed impossible during the band’s modest early days in Dublin. Garrigan used to play gigs in local pubs, while he and guitarist Mark Prendergast used to busk together on Grafton Street.

While touring kept Kodaline in the public eye in 2019, they dedicated much of the year to making new music. Their previous album, 2018’s Politics of Living, saw them travel around to work with various producers and songwriters. This time around they took a different approach. The majority of the process revolved around the four of them in their modest recording space in Dublin. And rather than work on it continually, they kept the sessions fresh by breaking for weekends and short tours. With bassist Jason Boland leading the production side of things, this streamlined process took them back to their roots.

“Our music is now as emotional as it can be,” says drummer Vinny May with contagious enthusiasm. “We're really confident and optimistic about this record.”

The mission, says Garrigan, was to focus on the emotion that informs many Kodaline fan favourites  “And we all sing, so we wanted to use a lot of harmonies and play to our strengths.”

Those strengths are immediately apparent in the album’s first single ‘Wherever You Are.’ Opening with Garrigan’s expressive topline backed by little more than swirling vocal harmonies, Kodaline build up the track towards its dramatic denouement. "‘Wherever You Are’ is about loved ones staying in your heart and mind even when they’re not with you.” That’s the power of Kodaline. They’re four regular people who explore topics that everyone experiences. That also inspires a wider community in their following, with fans becoming life-long friends with people they meet at the band’s shows.