WATCH: Glen Hansard performs from the National Library of Ireland

Irish singer-songwriter Glen Hansard performed as part of the 'Courage' live concert series from Other Voices in Ireland on Thursday, May 21 - watch it back here! 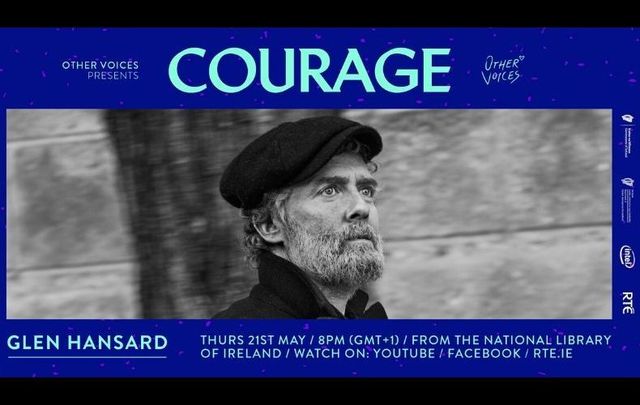 Glen Hansard will be performing live on May 21 from The National Library of Ireland. Other Voices

Glen Hansard performed on Thursday, May 21 as part of the ‘Courage’ concert series from Other Voices in Ireland - watch back on a clip from his fantastic performance, streamed from the National Library of Ireland, here:

Glen Hansard went live on Thursday, May 21 right here on IrishCentral and over on our Facebook page as part of our ongoing IrishCentral Happy Hour livestream series.

Organizers say: “Glen Hansard has an extensive history with Other Voices having performed on and presented the first-ever series and played on the show multiple times in the intervening years, he is a lifelong friend of the show.

“Glen initially came to fame with his band The Frames, one of the most loved Irish bands ever. His song 'Falling Slowly,' which was featured on the soundtrack for the film Once, which he also starred in, won an Oscar in 2008.  He has since become an immensely successful solo artist worldwide and has released four albums to critical acclaim.

"For the duration of the series, artists will be asking the viewer to donate what they can to a charity of their choice. Glen Hansard has chosen Safe Ireland, a charity that offers a range of services to women and children experiencing domestic violence."

Glen Hansard is the lead singer and a founding member of Irish rock band The Frames. He is one half of folk duo The Swell Season, along with Czech pianist and vocalist Markéta Irglová. Together, they share an Academy Award for Best Original Song for “Falling Slowly,” from the film Once, in which they both starred. He has released four solo albums, including the GRAMMY-nominated Didn’t He Ramble (2015), as well as a number of EPs.

Those who have followed Hansard’s career since his award-winning turn in Once will have witnessed one artistic arc: the journey of a Dublin busker who cut his teeth on the greats - Dylan, Van Morrison, Leonard Cohen – and followed the path of the troubadour, the singer-songwriter to great effect.

But there is another thread running through Glen Hansard’s musicianship. In his decades as the lead singer of The Frames, rock and folk ambitions coexist with moments of strangeness, intimacy, and stillness: love songs drowning in the last fevers of the Spanish Flu (“Santa Maria”), protagonists who ponder throwing it all away and disappearing in a fugue state (“Keepsake”). And above all, the band, veering from silence to cacophony, ready to underpin soaring emotional and dynamic shifts. His latest album This Wild Willing, released in 2019, marks an inflection point in his career, a turning where he marries the sonic inventiveness of the best of his work in The Frames to the discipline he’s found as a lyricist in his solo career.

It is an album guided and formed by the twin totems of resolve and surrender – the resolve to see a thing through alongside a willingness to surrender, to trust in that which lies outside yourself – the other musicians in the room, your lover, your healer, your audience.