Ryan Tubridy will join Paul Lynch and the Irish in France for their St Patrick’s Day Celebration on Sunday 14 March 2021. 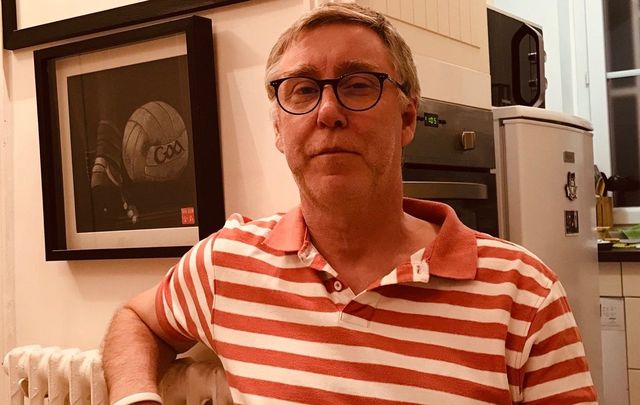 Paul Lynch, Founder and Chairperson of the Irish in France Association.

In the lead up to St Patrick’s Day, Paul Lynch, (Chairperson) and the board members of the "Irish in France" association, IIF have pulled out all the stops to make sure the Irish community in France has a Paddy’s Day to remember, despite the current global health crisis.

In 2018, the IIF organized the first-ever St. Patrick's Day’s parade in the City of Light, stepping out, under the snow, with 500 pioneer parade-goers braving the elements. For the 2019 SPD parade, over two thousand stepped out, from the Centre Culturel Irlandais. In 2020, due to Covid, the IIF had to cancel numerous events including the third SPD Paris parade.

Despite the obvious disappointment, they immediately rolled up their sleeves and put on their high-tech caps sprinkling 2020 and the first months of 2021 with culture, fun, and frolics online. They are committed to ensuring SPD 2021 will make Irish eyes in France smile and have ensured members are well prepared for “the wearing of the green”.

On Saint Valentine’s Day, I received a bulging A4 letter in the post. It wasn’t a Valentine's, but a “Paddy Pack” from the IIF. Like all the IIF members, I received two Irish flags, bunting, tattoos, SPD’s balloons, and a packet of shamrock seeds! This snowballed a flurry of posts on the IIF Facebook page as people posted photos of little shamrocks, pushing their heads above the soil, in a spontaneous shamrock growing competition.

H.E. Ambassador of Ireland to France, Patricia O’Brien will open the celebrations. In the true spirit of Paddy’s Day welcome and friendship, non-IIF members are also invited to join the Sunday 14 March at 7pm, CET event.

A star-studded cast is being lined up including Lisa Lambe, Fiachna Ó Braonáin, Mundy Mary Murray (aka Mrs Gibney), Cairde, and Ardal O'Hanlon who are preparing to zoom into Paris to help the Irish Community drown the shamrock.

Local Irish French-based stars are also gearing up to perform. Apart from these wonderful Irish talents from the world of music, stage, and film, Ryan Tubridy (fondly aka “Tubs”) announced on his RTE Radio 1 show on 5 March that he also plans to join the IIF, SPD online festivities!

His announcement came just after he played Ella Fitzgerald singing Cole Porter’s song “I Love Paris in the Springtime”. For the Irish community in France, tuned in to RTE 1 the delight was tremendous. Hearing “Tubs” announce that he was thinking about the Irish in France bolstered our link with home. We were also chuffed that it was Paris and France he thought about when springtide tugged the strings of wanderlust.

This is not the first time “Tubs”, the King of Irish media, has risen to the occasion at the sides of “The Great Paul Lynch” as he called him on his 5 March show. Lynch, who has been in Paris since 1994, previously organized ball events for the Irish charity, GOAL. He has raised more than €360,000 for Irish charities over the years. “Tubs” emceed at the Paris Goal balls on several occasions. At one of the balls, he played his role of master of ceremonies to the hilt, continuing the post ball festivities, to be one of the last persons standing, in a mythical Parisian Irish pub at dawn. Many Irish pubs in Paris have licenses to open until 5am, in normal times.

The IIF, SPD 14 March celebration is vital for the spirit of the Irish diaspora in France. We currently have a 6 pm - 6 am national curfew, and in some departments, weekend lockdowns are also in vogue. In an attempt to stem soaring Covid-19 cases, residents of Nice and surrounding areas on the French Riviera have joined the northern French city of Dunkirk in the temporary return to weekend lockdowns. Parisians, many who live in small apartments, hope the city will continue to avoid weekend confinement.

The early evening curfew is giving many cabin fever. With the beautiful weather and the stretch in the evenings, people are reluctant to call it a day at 6pm. You can see them reluctantly scurrying into dark metros, to get back home, behind locked doors. The bizarre bewitching hour, of 6pm, when the sun dances teasingly on Parisian cobbled streets, can paradoxically be both lifesaving and heartbreaking.

However, having the 14 March SPD celebration to look forward to is a splash of optimism and craic on the horizon for the Irish diaspora. Once again we discuss how delighted we are that Lynch, (who traded Ballybough, Dublin for Bastille, Paris) set up the IIF in 2017, giving us our own local Irish association in France.

Watching our shamrocks grow, in the Covid springtime and exchanging progress notes, along with the “ceol agus craic” that 14 March promises, is something that exceptional SPD stories are woven from.

It seems nothing could stop “Tubs” celebrating SPD with his friend Lynch, who left school at 15 to become a messenger boy in Aer Lingus.

Lynch, who has worked in air-traffic control since his arrival in Paris, has always combined the “day job” with helping the Irish community, from clocking up years of voluntary work for Irish charities and the Paris GAA, to his current role at the helm of Irish in France. It seems his vision is interwoven in a “meitheal” [2], community-based tissue. Seeing him operate over the years has been inspirational. His initiatives have brought Irish fun, happiness and relief to so many, not only in France but dotted around the globe.

When it comes to charitable giving, the Irish rank as the fifth most generous country in the world [3]. Lynch’s “French dream” honors both Ireland and his country of adoption where "liberty, equality and fraternity", will hopefully always be the national creed…

[1] [1] The IIF receives funding from the Emigrant Support Programme administered by the Irish Department of Foreign Affairs and is also strongly supported by the Irish Embassy in Paris.

[2]  The word meitheal describes the old Irish tradition where people in rural communities gathered together on a neighbor’s farm to help save the hay or some other crop. Each person would help their neighbor who would in turn reciprocate.