Irish man Rauri Morgan moved to Rathlin Island off of Co Antrim eight years ago and hasn't looked back since. 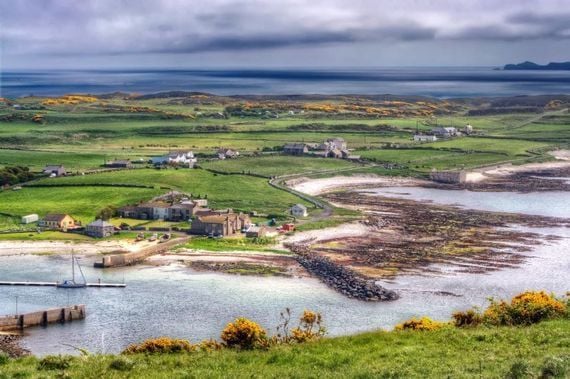 An Irishman who turned his back on his corporate career to live on a remote island off Antrim claims that his 500-year-old cottage is haunted.

Rauri Morgan, 41, who worked as a human resources executive in Dublin, opted for a career change in 2013 when the company he worked for went out of business and told him that he would have to tell the staff that they had lost their jobs.

Looking for a fresh start, Morgan headed north to Rathlin Island, a remote island off the coast of County Antrim in Northern Ireland, and moved into a 500-year-old cottage that had once belonged to his grandmother but had lain derelict for 15 years.

The cottage had a flushing toilet and an outside tap, but no electricity, and so Morgan set to work over the next eight years, meticulously renovating the ancient property to make it fit for living.

Morgan told his story on "New Lives in the Wild with Ben Fogle" on Channel 5 in the UK and bizarrely revealed that he doesn't like water, fishing, or the cold - three staple ingredients of life on a remote Irish island.

He told Fogle that his house is reportedly haunted by ghosts, who he sometimes hears "partying in the living room".

"There’s definitely been voices heard and doors opening and closing on their own," Morgan told Fogle.

Prior to his big move, Morgan earned money by working shifts in a local pub, while he also selflessly volunteered as a local firefighter.

He also told Fogle that he has been to the Greek island of Lesbos six times in recent years to help refugees in Moria Camp, the largest migrant camp in Europe.

"People were seasick, they were scared, they urinated on themselves," he told Fogle of experiences at Moria.

"You have the most vulnerable people sitting and swirling around in that kind of mess for maybe 2-3 hours, it was pretty horrific."