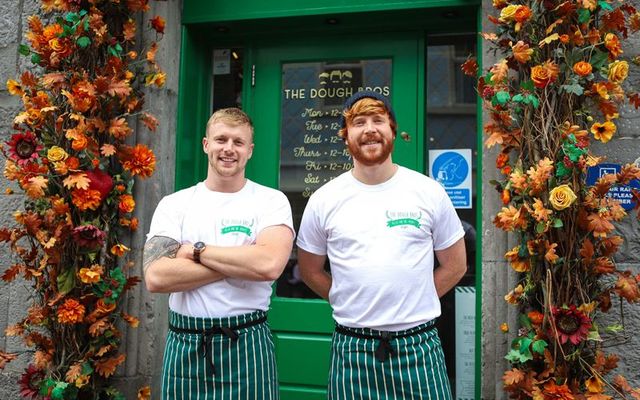 Brothers Ronan and Eugene Greaney of The Dough Bros in Galway City.

The Dough Bros pizzeria in Co Galway has been crowned one of the Top 100 pizzerias in the entire world - and the single best pizzeria in Ireland.

The Dough Bros, aka Ronan and Eugene Greaney, recently traveled to Naples, Italy for the 50 Top Pizza event where their Galway pizzeria was named the 79th best pizzeria in the world, as well as the Top Pizzeria in Ireland 2022.

Judges praised The Dough Bros, saying that their “dough is made to perfection and the selection of raw ingredients is always top quality.”

In the airport trying to put down words on how to describe the feeling of our little Pizzeria in Galway being named the...

The annual 50 Top Pizza compiles the guide to the best pizzerias in the world. Awards are judged on the quality of the pizza (leavening and primary ingredients), the service, the location, the wait, and the beverage lists.

On September 5, The Dough Bros flew back to Naples, where they fell in love with pizza as kids, where Ronan trained in 2015, and where they go often to try pizzerias and get inspiration.

“We have flown across the world to New York, Italy, Copenhagen to eat and soak up what these guys do. We have ordered their cookbooks. And there we are on stage with them,” Eugene said.

“We have some of the best dairy, meat, veg in the world right here, on our doorstep [in Ireland]. So why can't one of the world's best Pizzerias be right here in Galway, on the west coast of Ireland? Sounded crazy but that has been our goal from day one, and now we have seen that materialise.”

Eugene reflected a very focused mindset from the outset: “We started with a mission to change people’s perceptions of what pizza could be when it's done right. When it's done with craft, dedication, and the best of Irish ingredients. We wanted to shake things up in the Irish Pizza scene but also to put Irish Pizza on the international map.

“After our training in Naples in 2015, and numerous trips to Italy, the States, and more, we had a quiet confidence in the Irish Food scene and felt what some of our peers were doing here at home was up there with anything we had tried. The Irish food scene gave us huge confidence and inspired us like nowhere else. We started to ask why the best Pizzerias in the world have to always be in Naples, New York, London? And now Ireland and Galway is there.”

The Best Pizzeria in Ireland

The Dough Bros had also already been named the Best in Ireland at the 2021 awards and have now held onto their title. There was big praise too for their pivot during 2020 for their at-home pizza kits, which proved a huge hit when lockdown kept people from their favourite restaurants.

Top 100 pizzeria judges said: “The last two years have been very complicated for these brothers from Galway. However, the health crisis has made the two rethink their business strategy, leading them to decide on a new offer, a pizza which can be sent to all corners of the country.

"The idea has been a resounding success, and now they are reaping the rewards. In fact, undeterred, they have refined their deliveries and they have developed a kit for making pizza at home. The pizza is baked in a wood oven and if you live near Galway or they can be delivered to any part of Ireland."

The Dough Bros have just renovated their base at Cathedral Buildings on Middle Street and at O’Connells Bar in Eyre Square in Co Galway. They open Tuesday to Sunday from 12 pm to 10 pm. You can learn more about The Dough Bros on their website, Facebook, Twitter, and Instagram pages.