Geraldine Mullan's sunflower "Field for Hope" in Co Donegal is a living monument to her husband and two children who were killed in a car accident in 2020. 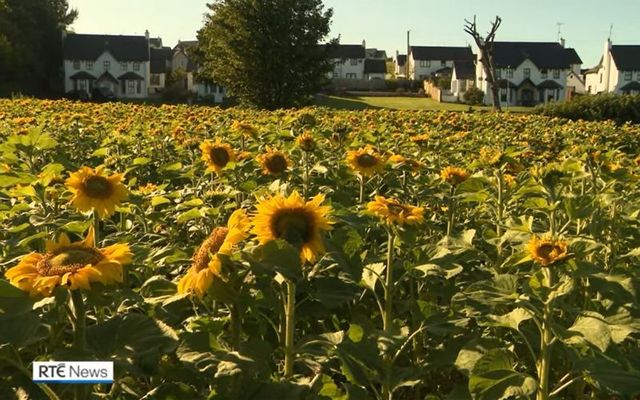 The "Field of Hope" of sunflowers in Co Donegal. RTE News, YouTube

A sunflower field in Co Donegal becomes a monument to hope two years after Geraldine Mullan lost her husband John and their two children, 14-year-old Tomás and six-year-old Amelia, in a tragic car crash in 2020.

Geraldine was also in the car, which went off the road and into Lough Foyle, but she was the only one who managed to escape.

After the tragedy, and inspired by her daughter's love of sunflowers, Geraldine planted the "Field of Hope," a  2.5 acre field of sunflowers as a living tribute to her lost family.

A post shared by The Mullan HOPE Centre (@themullanhope)

"I look for a little bit of hope each and every day, so for me, this is the field of hope," Mullan recently told RTÉ.

The sunflower field is located on the Inishowen Peninsula in Co Donegal at Quigley's Point between Derry and Moville and is just a few hundred meters away from the location of the accident.

The land, which was donated by local farmer John McCarron, used to grow potatoes and barley but it is now home to thousands of sunflowers.

A post shared by The Mullan HOPE Centre (@themullanhope)

A pathway carved into the field of yellow flowers spells the word "Hope."

Mullan says her friends helped to plant and maintain the crop. Among those sown in the field are seeds from a sunflower grown by Geraldine's young daughter Amelia for a competition. Amelia and her brother Tomás had been growing the flowers with help from their father, who owned a garden center.

"They looked after the flowers all summer and it was just about a week shy of the accident that we sent in the photographs for the competition," said Geraldine.

"Out of one sunflower I kept, I got 170 seeds last year. It's very poignant for me because it was Amelia's favorite flower."

Catherine Carlin, a friend who helped with the project, said: "Geraldine's husband John used to say, plant a seed and see where it goes and in this case, the seed was a conversation.

"We weren't sure they would grow, but they have and we are absolutely delighted with the outcome. It's a very unusual sight to see in Donegal.

"A very special person once told me that sunflowers follow the sun during the day to help them grow and that when they can't do that, they turn towards each other, which is something that we could all learn to do, to turn to each other, to support each other."

In conjunction with the Redcastle Village Association and the Mullan HOPE sunflower festival, Geraldine opened the field to members of the public over the past weekend (August 20-21) to spread her message of hope. Saturday, August 20, marked the two-year anniversary of the tragedy.

Geraldine wrote for the Donegal Daily: "Just a few hundred meters from where that same water claimed my beautiful family on 20th August 2020 and where a memorial 'Three sleepers' now stands in solemn commemoration, these majestic and eye-catching sunflowers are intended to bring hope in these much needed times."

You can watch the RTÉ News report on Geraldine Mullan's 'field of hope' here:

You can learn more about the Field of Hope and the Mullan Hope Centre here on Facebook.