In her childhood, Virginia O'Hanlon penned a letter that would prove that meeting Santa is not the only way to determine if he is real. Her story even became a movie! 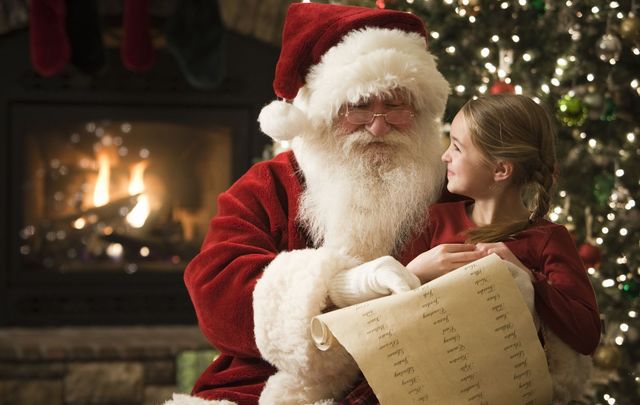 In her childhood, Virginia O'Hanlon penned a letter that would prove that meeting Santa is not the only way to determine if he is real. Her story even became a movie!

It’s the heavy question most of us come to at some point in our lives. After years of writing letters, leaving cookies out on Christmas Eve, and blissfully ignoring the sounds of last-minute wrapping paper echoing down the hallway early Christmas morning:

One September evening in 1897, eight-year-old Virginia O’Hanlon tearfully asked her father this very question when he arrived home from work at their apartment on the Upper West Side of Manhattan.

Dr. Philip O’Hanlon’s answer was smart, creative, and, perhaps, a way of buying himself some time: He told her to send her question into the New York Sun newspaper.

The next day, Virginia sent the following letter to the editor of the Sun:

I am 8 years old. Some of my little friends say there is no Santa Claus. Papa says, "If you see it in The Sun, it's so." Please tell me the truth, is there a Santa Claus?

The Sun replied on the editorial page of its September 21, 1897, edition. The response was not prominently featured; it ran in the seventh slot on the page, below editorials on local and state politics and even a piece about the recently invented chainless bicycle.

Nevertheless, it captured the hearts of New York City and would go on to become a Christmas letter for the ages.

Your little friends are wrong. They have been affected by the skepticism of a skeptical age. They do not believe except that which they see. They think that nothing can be which is not comprehensible by their little minds. All minds, Virginia, whether they be men's or children's, are little. In this great universe of ours, man is a mere insect, an ant, in his intellect as compared with the countless world about him, as measured by the intelligence capable of grasping the whole of truth and knowledge.

Yes, Virginia, there is a Santa Claus. He exists as certainly as love and generosity and devotion exist, and you know that they abound and give to your life its highest beauty and joy. Alas! How dreary would be the world if there were no Santa Claus! It would be as dreary as if there were no Virginias. There would be no childlike faith then, no poetry, no romance to make tolerable this existence. We should have no enjoyment, except in sense and sight. The eternal light with which childhood fills the world would be extinguished.

Not believe in Santa Claus! You might as well not believe in fairies. You might get your papa to have men to watch in all the chimneys on Christmas Eve to catch Santa Claus, but even if you did not see Santa Claus coming down, what would that prove? Nobody sees Santa Claus, but that is no sign that there is no Santa Claus. The most real things in the world are those that neither children nor men can see. Did you ever see fairies dancing on the lawn? Of course not, but that's no proof that they are not there. Nobody can conceive or imagine all the wonders that are unseen and unseeable in the world.

You tear apart the baby's rattle and see what makes the noise inside, but there is a veil covering the unseen world which the strongest men, nor even the united strength of all the strongest men that ever lived could tear apart. Only faith, poetry, love, romance, can push aside that curtain and view and picture the supernatural beauty and glory beyond. Is it all real? Ah, Virginia, in all this world there is nothing else real and abiding.

The Sun had a strict policy of not revealing its editorial writers, so it wasn’t until his death in 1906 that Francis Pharcellus Church became known as the author.

The letter becomes all the more moving after his identity is known. As a battlefield correspondent for the New York Times during the American Civil War, he had seen more than his share of suffering and strife. He went on to found the Army and Navy Magazine and Galaxy Magazine with his brother, William Conant Church. The latter later merged with Atlantic Monthly, and Francis became a lead editorial writer for The Sun.

According to his editor at the time, Edward P. Mitchell, Church did not leap to the task when Virginia’s letter came in. "At first he bristled and pooh-poohed the subject," Mitchell later wrote, "but he took the letter and turned with an air of resignation to his desk."

His response went down in history. It has been the subject of TV specials, cartoons, cantatas, and Christmas window displays.

As for Virginia, her full name was Laura Virginia O’Hanlon Douglas. She wed a man named Edward Douglas in 1910, but he deserted her just before their daughter Laura was born. This did not hold Virginia back whatsoever. She powered on to earn her degree from Hunter College, a Master’s in education from Columbia University, and her doctorate from Fordham. She was a New York City school teacher for over 20 years and eventually became principal before retiring in 1959.

Throughout her life, she would continue to receive mail about the letter and dedicatedly replied. She even had a specially printed copy of the editorial, which she included in all of her replies.

One of her letters, written when she herself was grown and published on the 40th anniversary of Church’s editorial, read:

"Is there a Santa Claus?'

Dear children of yesterday and today, when that question was asked, I, a little girl, was interested in finding out the answer just for myself. Now, grown up and a teacher, I want so much that all little children believe there really is a Santa Claus. For I understand how essential a belief in Santa Claus, and in fairies, too, is to a happy childhood.

Some little children doubt that Santa still lives because often their letters, for one reason or another, never seem to reach him. Nurses in hospitals know who some of these children are. Teachers in great city schools know others.

Dear children of yesterday, won't you try to seek out these trusting children of today and make sure that their letters in some way may reach Santa Claus so that 'he will continue to make glad the heart of childhood'? That, I believe, is the best way of proving there is a Santa Claus, for ourselves and for the children.