Bono compared losing his voice before a concert in Berlin to Samson losing his strength when his hair was cut. 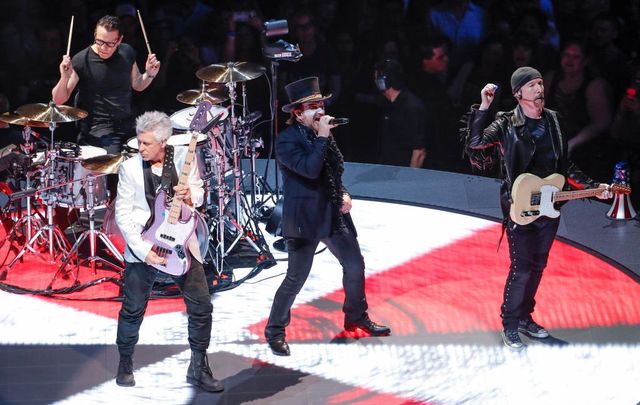 Larry Mullen Jr., Adam Clayton, Bono, and The Edge of the Irish rock band U2 perform during the 'Experience + Innocence' tour at the United Center in Chicago on May 23, 2018. KAMIL KRZACZYNSKI/AFP/Getty Images

Irish rock stars U2 have spoken for the first time about their fear the band was over when frontman Bono lost his voice during a gig earlier this year.

As Irish fans flock to Dublin for the string of sold-out U2 gigs taking place this week, the Irish band has spoken for the first time about the fear that struck them in September 2018 when frontman Bono lost his voice during a gig.

The rock legends were performing in Berlin, Germany when Bono's voice suddenly disappeared and advice from a specialist caused the band to fear that after all these decades, the adventure was to come to an abrupt end.

Inside the U2 show that was cancelled after Bono lost his voice https://t.co/6vWkUM4R1r pic.twitter.com/GFEF5UuWJo

Speaking on the phone from beneath the stage where they had retreated, the lead singer's voice specialist Steven Zeitels told the band that there was a 70 percent chance Bono had suffered a severe vocal hemorrhage. He also warned that if Bono ever would sing again, it would be years before he was again able to do so.

Speaking to the Sunday Independent for the first time about the incident, Bono compared himself to Samson losing his hair: “The strong man … with no strength.”

In an exclusive U2 interview, @U2's #Bono talks to Brendan O’Connor about faith, family and losing his voice - only in tomorrow's LIFE Magazine. #u2 #bono #sindo pic.twitter.com/84moTteRDT

“It moved so quickly from singing well to not being able to sing at all — that was the shock,” he added, although stating that he did not feel as if he had broken anything in his voice.

Despite this, the band took Zetital's advice and called off the gig until Bono's throat was fully checked.

Did you go to see U2 on this tour? Let us know in the comments section, below.