Thanksgiving Eve has joined St. Patrick's Day among the top biggest drinking nights of the year in the US. 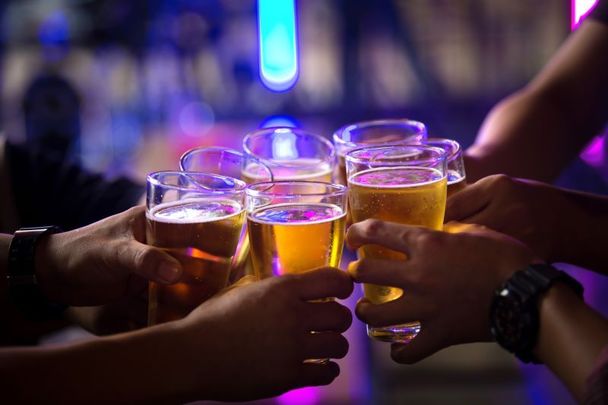 Thanksgiving Eve rivals St. Patrick's Day as one of the biggest drinking days of the year in the US. Getty Images

Thanksgiving Eve, also known as Blackout Wednesday, has joined St. Patrick's Day among the biggest drinking nights of the year, according to police.

In the past, police have issued warnings ahead of Thanksgiving Eve, which they claim is worse than St. Patrick’s Day in terms of over-consumption of alcohol and drunk driving.

“Drinksgiving,” the name sometimes given to the Wednesday before Thanksgiving, has quickly become one of the biggest drinking nights of the year as college students and young adults return home to celebrate the holiday with family and friends.

Now established as one of the busiest bar nights of the year, the crowds on St. Patrick’s Day will look small in comparison to the Thanksgiving Eve parties.

“I'd put it up there with St. Patrick's Day,” a Pennsylvania police officer told TribLive.com, back in 2017.

“It's definitely busier than New Year's.”

“That's our biggest day of the year when it comes to people drinking alcohol and driving vehicles,” state police spokesperson Steve Limani said.

In response to the 'Blackout Wednesday' phenomenon, the National Highway Traffic Safety Administration in the US encourages drivers to be safe on Thanksgiving Eve.

According to the NHTSA, 138 drivers involved in fatal crashes on Thanksgiving Eve between 6 pm and 5:59 am from 2016 through 2020 were alcohol-impaired.

Also between 2016 and 2020, drivers between the ages of 21 and 24 represented 44%, the largest portion, of alcohol-impaired drivers involved in fatal crashes on Thanksgiving Eve.